India’s financial capital Mumbai tops global ranking when it comes to expat salaries, according to the latest HSBC Expat survey.

The Maximum city also pipped the likes of Shanghai (4), Jakarta (8) and Hong Kong(9), the other three Asian cities which featured alongside US and European cities in top 10 expat salary rankings. In total, 31 cities were home to average earnings of more than $100,000 (Rs 64,76,500). 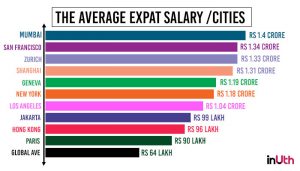 Switzerland continues to remain lucrative with two cities in the top 5 (Geneva and Zurich), thanks to the high average incomes and the low personal tax rate.

Despite Switzerland’s notorious living costs, the country saw 77% of expats in Zurich report that their disposable income were higher than in their home cities.

Though cities in Asian countries fared well in average expat compensation, all including Mumbai ranked lower in expat job opportunities than UK and US destinations such as London, San Francisco, New York, or even Birmingham, according to HSBC.

Dublin, a tech hub in Europe, ranked below the global average in expat salaries but was among top five destinations for expat job opportunities.

The study also found that expats in India report high levels of confidence in the local economy – 71% compared with 53% globally – “against a backdrop of extensive economic reforms”. The number of resident expats who recommend the country for career progression has increased by 12 percentage points since 2016 to almost two-thirds (63%) in 2017.