A 57-year-old man is contributing in his own way to end open defecation in India by building toilets out of thermocol.

Pune’s Ramdas Mane has over 22,000 portable toilets to his credit, which has been supplied across the country.

Mane founded his company in 1993 to essentially build thermocol machines. Today, he supplies machines to as many as 45 countries.

Over 70 people are employed in his company which has an annual turnover of Rs 40 crore.

However, the toilet building business is run on a no-profit-no-loss basis and he has been honoured with several awards both by the government as well as various organisations for his path-breaking innovation. 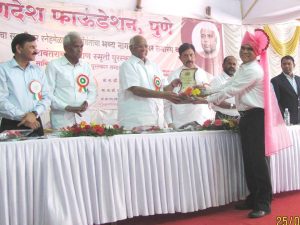 His company also gives toilets to underprivileged girls as wedding gifts, an initiative that has earned him more acclaim.

“We also give these as wedding gift to girls who don’t have the capacity to build toilets, and have given it to 25 girls till now,” Mane told ANI.

Hailing from Maharashtra’s Satara district, Mane faced various hardships to reach where he is today. He even had to do multiple multiple part-time jobs to fund his education when he was young.

Mane came up with the idea of building toilets with thermocol after former Deputy Chief Minister of Maharashtra R.R. Patil announced the Sant Gadge Baba Gram Swacchta Abhiyan, reported latestly.com As per the initiative, any village which had 200 toilets would be declared open defecation free and would get a reward of Rs.25 lakhs. It was then when he decided to get a reward for his own village.

The cost of building 200 toilets was Rs.7 lakhs and Mane donated Rs.5 lakh for it. But he realised that for winning the award, he needs to build two more toilets. He then went to Pune, got thermocol and cement, and ‘sandwiched’ the two. He then realised that a mobile toilet can be built in just two hours.  It was his village Lodahwade (In Satara) that won the first prize and Rs. 25 lakh cash reward was used to construct irrigation tanks.