At a time when entire country have come together to help Kerala flood victims, a Court in Haryana’s Panchkula came up with a noble way to support those affected by the deluge. A special CBI judge directed three people, tried for corruption, to pay Rs 15,000 each to Kerala Chief Minister Distress Relief Fund.

Former superintendents Anil Kumar and Ajay Singh and former inspector Ravinder Dahiya of central excise and audit department were arrested by CBI from Murthal in Sonipat for allegedly accepting a bribe of Rs 3 lakh to minimise duty on a company under scrutiny in February 27, Times of India reported.

Special CBI judge Jagdeep Singh ordered the three, who did not turn up for for the last hearing, to deposit the amount in the relief fund and a receipt of it be placed on record on or before the next date of hearing on October 1, Times of India reported. The accused and their counsels were not present for the hearing on May 25 when two prosecution witnesses were cross-examined. 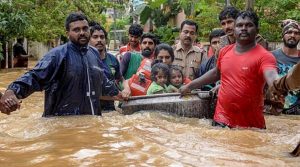 As Kerala faces its biggest flood in a century, there has been an outpour of support from across the country and abroad. So far, 322 people have lost their lives while thousands have been rendered homeless. Over 3.26 lakh people are still in relief camps across Kerala even after a fortnight of the devastating deluge. The total amount received towards the CMDRF touched Rs 700 crore on Monday, officials said.