India leads global fight against child marriage as the country witnessed sharpest decline in its numbers in last 10 years, a survey by UN children’s agency UNICEF showed on Tuesday.

The proportion of underage girls getting married in India has nearly halved, the survey revealed adding that the risk of a girl being forced to marry before the age of 18 in South Asia has decreased from nearly 50 percent to 30 percent.

“25 million child marriages were prevented worldwide in the last decade, with the largest reduction seen in South Asia – where India was at the forefront”, it said.

In South Asia, one in five girls are now married before they are 18, compared with one in four a decade ago, according to the agency.

“In the current trend, 27 percent of girls – nearly 1.5 million girls – get married before they turn 18 in India. This is a sharp decline from 47 per cent a decade ago.” 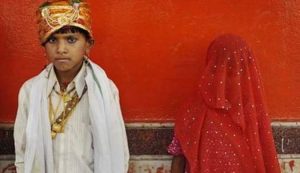 The agency compared data from its 2006 and 2016 health survey that asked women in the 20-24 age group whether they had married before they turned 18, Reuters reported. It also took into account child marriage data from the 2011 census.

The agency attributed the change to better access to education for girls, government initiatives and increased public awareness .

Notably, India is home to more than 20 percent of the world’s adolescent population and accounts for the highest number of child marriages in South Asia given its size and population.

The legal age of marriage in the country is 18 for women and 21 for men but millions of children are forced into marriage when they are minor, particularly in rural India.  Last year, the Supreme Court held that sex with an underage wife constituted rape.

World leaders have vowed to end child marriage by 2030 under the UN Sustainable Development Goals.