A 19-year-old engineer, who happens to be a huge fan of Tamil superstar Vijay, has landed in Jail after he allegedly made abusive remarks against Prime Minister Narendra Modi. The youth, identified as Thirumurugan, was arrested on Monday from his home after BJP district secretary K Marimuthu lodged a complaint against him at Tamil Nadu’s Srivilliputhur town police station. In the complaint, Marimuthu has accused the teenager of posting abusive comments against Prime Minister Narendra Modi on Facebook.

Speaking with inuth.com, Virudhunagar SP, M Rajarajan said,”BJP district secretary K Marimuthu lodged the complaint against Thirumurugan. He said that he has uploaded defamatory content against PM Modi in a Facebook page.

Apparently, when  Marimuthu shared a meme making fun of Vijay’s film on Facebook, Thirumurugan retorted by abusing the prime minister in the comment section of the post.

“Marimuthu lodged the complaint against Thirumurugan on 29th(October) and the content was uploaded on 23rd (October),” he added.

The accused has been booked under Section 67 of the Information Technology Act, 2000 (Punishment for publishing or transmitting obscene material in electronic form), and CrPC section 505 for conducting public mischief. 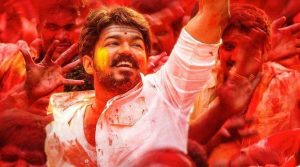 Vijay fans and BJP supporters are sparring online over a scene from his latest release,Mersal,  that slammed BJP government’s initiatives such as the Goods and Services Tax and Digital India.The saffron party had demanded the makers of the film to remove the “incorrect” scenes. However, buoyed by support from celebrities and politicians, the producers decided to not remove the controversial scenes from the film.

Last week, Chennai High Court dismissed a PIL that sought to revoke the censor certificate issued to Vijay starrer Mersal for its ”anti GST” dialogues. Rejecting the plea, a division bench comprising Justices M.M. Sundresh and M. Sundar said, “This is a democracy and people have their right to freedom of expression, and this applies to films as well.”