A young Chinese woman has taken it upon herself to promote Tamil in her native country. Zhou Xin, who heads the Tamil language department at Beijing, China’s Foreign Study University, loves the Dravidian language so much she came all the way to India to learn it.

She is currently teaching a batch of about 10 students. An avid learner, Zhou has been studying the rich Tamil culture for last 15 years. In order to give her students a glimpse into the rich culture that the language belongs to, she plans on taking them on a trip to Tamil Nadu soon.

“They will learn the language and tour Tamil Nadu for six to twelve months to witness the rich culture of the place where their course originated,” she told The Times of India. 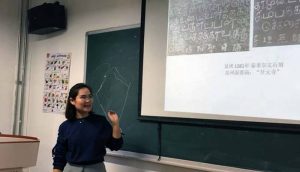 “The tour will be part of the third year of their study after getting some basic skills on spoken and written Tamil,” she added.

A few renowned Tamil scholars also addressed the students through videos in Zhou’s class. Fondly called as Easwari by her Tamil friends, the Chinese national stayed in Pondicherry, four years ago to learn spoken Tamil at the Pondicherry Institute of Linguistics and Culture. She also learned Bharatnatyam and even performed in front of a large audience at a government sponsored function.

She has also worked for Radio China’s Tamil program. Tamil is one of the world’s oldest living languages and over 77 million people speak Tamil worldwide.