With the Delhi Assembly election results coming out, Arvind Kejriwal has taken the ballot by storm. Here’s another ‘little Kejriwal’ who is taking the internet by storm.
A photo of a boy with the caption ‘mufflerman’ shared by Aam Aadmi Party’s twitter handle has been doing rounds of social media.
The boy in the picture can be spotted donning a red sweater, Kejriwal’s signature style muffler, spectacles, and a fake moustache.

The one-year-old boy has been identified as Avyaan Tomar, son of AAP supporters Rahul Tomar and Meenakshi, The Print reported.
Rahul Tomar a businessman had also dressed Avyaan’s sister Fairy, as Kejriwal after Delhi Assembly elections in 2015 The Print report said.

The photos of the Avyaan soon went viral with netizens gushing over the “cuteness overload”. The picture by now has garnered over 18,000 likes and 2,600 retweets. 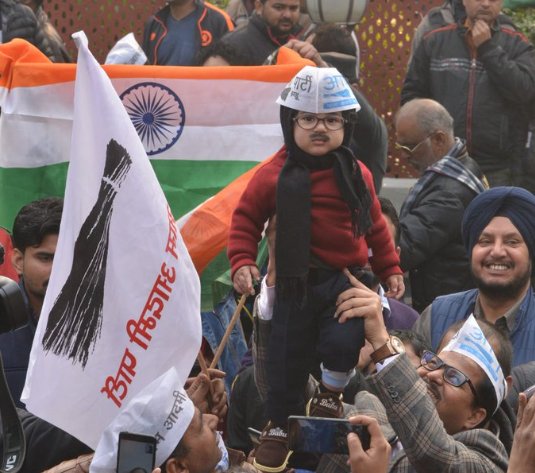 He will be the CM one day. #DelhiResults

Okay this baby Kejriwal is melting my heart

Picture of the day

In the Delhi Assembly results which came out on Tuesday, AAP swept to power for a consecutive third term winning 63 seats. The BJP managed to get only seven seats, as per the data provided by the Election Commission website.