“Your book is mine, mine is yours.” That is the idea behind 69-year-old Mahendra Kumar’s Read&return Free Library (RFL) — an unmanned, community library where anyone could simply waltz in and pick up any book. “I want to show the world that Indians don’t lack integrity while handling such things,” he says.

Back in April 2015, when Kumar first started RFL, he wasn’t aware of the existing ‘Little Free Library’ (LFL). Upon realising that they share the same concept of ‘Take a book. Return a book,’ he decided to name his community library after the nonprofit, which was founded in 2009.

RFL was conceived three years ago in a cement shop in Thirumullaivoyal, Chennai, with just about 30 books stacked on a table, which Kumar shared with the shopkeeper. Today, RFL has 66 libraries across Tamil Nadu and Maharashtra, with over 10,000 books. “I want to spread this throughout India,” says Kumar. 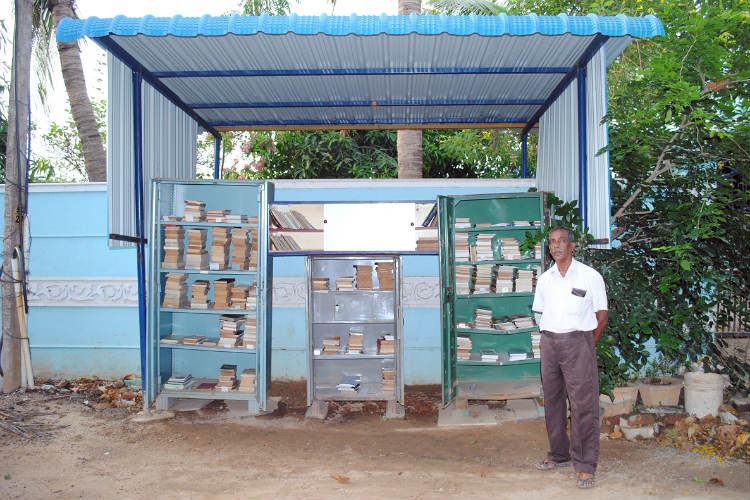 But it hasn’t been an easy journey for Kumar, maintaining thousands of unaccounted books in libraries across various locations, with no library cards or memberships. Over the years, Kumar has been building a network of people willing to donate books and those willing to establish RFLs in distant locations. “For 66 libraries today, I probably would have made 66,000 calls.” He says, “I just wanted to try something which is something unique.”

ALSO READ: This Chennai Man Used To Pretend To Be A Doctor To Sexually Harass Women Online

Kumar believes that the concept of a community library is simple enough for anyone to start an RFL. “I’m around 70, okay? If I can do this much, then other people can do much more. Because in a lot of houses, books are simply being wasted. Those can be made available to the public,” he says. 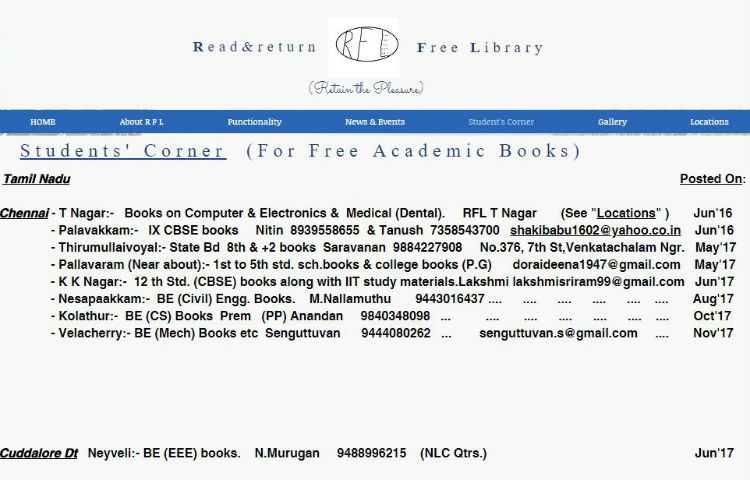 Kumar even started a website which is a platform for people to seek or donate books. The purpose of the website was to introduce a ‘Student’s Corner,’ which is built upon the age-old tradition of junior students taking books from their seniors when they graduate.

“I designed it myself,” he says. “If you go to others, they were asking money for designing. It may not be very professional looking, but I’m not bothered about that.” He wants to keep it as basic as possible to maintain RFL’s “for free” philosophy. Which also helps with that fact that RFL cannot receive sizeable monetary donations, as it is not a registered nonprofit organisation. When asked why he never registered RFL in his own name, Kumar says “It is a pucca public library as it is owned and run by the public.”

ALSO READ: A Chennai Choir Of Underprivileged Kids Is Set To Perform In The US

Speaking about what makes RFL truly unique, Kumar said that its overriding purpose is to bring back the community feeling. “Today, people are like islands. Where nobody knows their neighbours,” he says. “RFL is not to improve your knowledge. That’s secondary and it comes to you anyway once you read a good book. But apart from that, it’s a character-building activity.”