Since it’s a traditionally male-dominated profession, even Airports Authority of India (AAI) did not think it needed to include norms for the recruitment of women firefighters. In a refreshingly new form of breaking stereotypes when it comes to professions, Kolkata’s Taniya Sanyal became the first ever woman firefighter in the Indian aviation sector.

The state-run authority currently employs 3,310 firefighters at its airports across the country. Sanyal will, in a month, join their ranks after completing training that she is undergoing in Kolkata, reports The Times of India.

Notably, a fire service is a mandatory condition for planes to land anywhere. The male-only norm was done away with when AAI faced a shortage of firefighters during its expansion and new airports were being built. 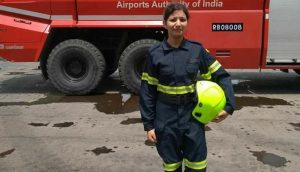 Speaking to Times of India, AAI chairman Guruprasad Mohapatra, the man who spearheaded the change, said, “We brought in contemporary rules and decided to recruit women in this field which required criteria for physical standards. I had done similar rule changes in Ahmedabad Municipal Corporation for firefighters. We got hold of them and then set the standards for recruiting women firefighters. This is the first time a woman has joined our ranks in this field and it will continue now.”

A postgraduate in Botany, Sanyal be appointed for one of the AAI’s eastern-region airports such as Kolkata, Patna, Bhubaneswar, Raipur, Gaya and Ranchi.

Expressing happiness over her selection, Sanyal told Times of India : “It is a matter of pride and great honour for me. I always wanted to do something challenging. Firefighting is a very noble calling.”

AAI on Twitter said she “sets an example of hard work and determination.”

Congratulations to Taniya Sanyal for becoming the first lady firefighter of #AAI. May this be a start of an inspirational story for all aspiring women. pic.twitter.com/L8dxpvRRvq

The Kolkata woman is the latest addition to the ever-growing list of women making inroads into male-dominated professions.

In February, Flying Officer Avani Chaturvedi became the first Indian woman to ever fly a fighter aircraft solo. She rode the Russian-made MiG-21. The IAF’s fighter stream was opened for women in October 2015.