At some 8000 feet above sea level, this school on picturesque hills in Chenab valley is setting new standards of education in Jammu and Kashmir.  Apart from securing excellent grades in academics, the students here enjoy watching movies, learn activities like rock-climbing, and speak fluent English from kindergarten, something otherwise unusual for this “traditionally-conservative” Doda district.

The winds of change started blowing a decade ago, when Sabbah Haji a young woman, born and brought up in Dubai, decided to do something for her homeland and subsequently opened the family-run Haji Public School in Breswana village, some seven hours drive from the winter capital of Jammu.

After spending her childhood in UAE where her parents worked back then, Sabbah had shifted to Bengaluru for further studies. While her parents returned to Doda in 2000, Sabbah, after completing her studies, stayed back in the metropolitan, working with the multi-national companies.

But it in 2008 when Sabbah went visited Doda to meet her parents that things changed. Incidentally Sabah’s Singapore-based uncle, Nasir Haji was also in the town then. During a get-together, the family discussed their charity trust providing assistance to the needy. This was when Nasir bounced off the idea to do something big for the homeland by opening a school and proposed that he would also fund the project.

The idea was well taken. Sabbah’s mother Tasneem, who worked as a teacher in the Middle-East, was already an experienced hand. Her father Saleem Haji was equally willing. But “aged minds” needed “support of young energetic hands.” 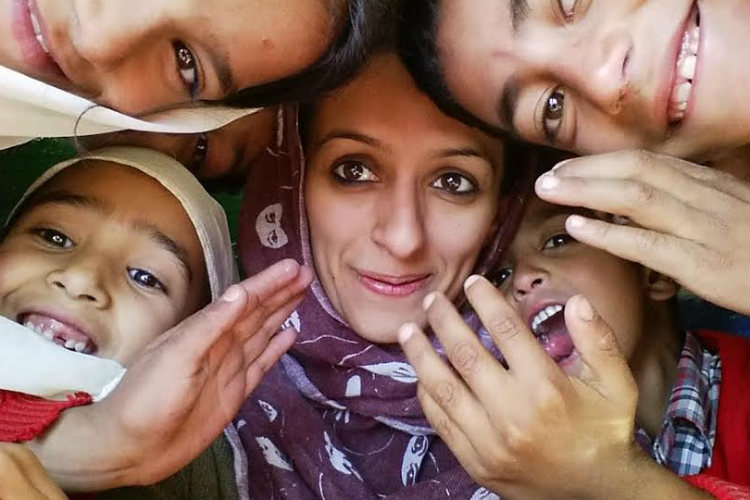 And this was where Sabbah’s need was felt. A post graduate in English, she willingly agreed. Giving up her lucrative career in the MNCs, she started working on the new dream in this remote hamlet.

As the school started, Sabbah was appointed as its Director and her mother its principal. But irrespective of designations, both mother-daughter duo work as teachers as well. Saleem Haji, a former manager in a shipment company abroad, is the now the village Sarpanch and ensures inspecting the school officially.

The Haji Public School had started with just one student in the kindergarten, who qualified her class 8th board exams last year with over 90% marks. Over the years the school has over 350 students and counting. “We didn’t start all the classes at one time as we wanted to groom our kids from the very beginning,” Sabbah told InUth.

Interestingly, while the co-educational institution bears a Muslim name, it has a big number of students from other communities as well.  Sabbah takes classes on religious and moral teachings too.

The school has a variety of specialised facilities including a movie projector where kids love watching movies in the company of their favourite “Sabbah Mam”. Blockbuster Dangal is scheduled to be screened when the school reopens in spring after ongoing winter vacations.

But then is this 34-year-old woman, who gave up her promising career abroad happy to work in the remote Valley? “Yes of course. It’s our home,” she says adding that internet keeps her connected to the entire world.

Having been recently awarded by the state government for her contribution in “Social reforms and empowerment”, Sabah gives credit to her family. “We are in love with this place because even when we were abroad, my father always kept us connected to our roots. He is a very grounded person for that matter.”

She says the Haji family is happy and satisfied to see the kids improve. But then Sabbah takes a deep breath: “A lot more needs to be done!”