Amazon’s Alexa has proved to be a gamechanger for AI technology. The virtual assistant that lets you control your device through your voice has become quite a rage in no time. However, not many people know that Alexa has a very strong Indian connection.

The techie with Indian roots

Rohit Prasad, who hails from Ranchi, Jharkhand, has created the game changing technology along with colleague Tony Reid.

A maverick in Voice Recognition Technology

Prasad pursued an MBA degree from Massachusetts Institute of Technology – Sloan School of Management in 2008. 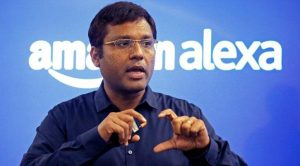 He is at the helm of research and development in speech recognition, natural language understanding, and machine learning technologies aimed at improving customers’ experiences with Echo devices, powered by Alexa.

The Indian techie was amazed at how the characters in sci fi series star war gave voice commands rather than pressing buttons.

“If you look at five years back, talking to a device from a distance, in the midst of a lot of noise, was just science fiction. We grew up in the Star Trek era, that was the inspiration for us”, he told Times of India.