Though women engineers have been serving as ground duty officers, they have never been part of the flight crew. Commissioned in January 2015, Jaiswal served as a battery commander in a frontline surface-to-air missile squadron before being selected for the six-month flight engineer course. A flight engineer is a member of the flight crew, responsible for monitoring and operating complex aircraft systems.

In her new role, Flt. Lt. Jaiswal will serve at IAF’s operational helicopter units and serve in “demanding and stressful conditions from the icy heights of the Siachen glacier to the seas of the Andamans,” a statement said.

Hailing from Chandigarh, Jaiswal completed her BTech from Panjab University. As a child, Jaiswal had aspired to be a soldier and an aviator. She described her achievement as a “dream come true”, The Hindu reported. The IAF started commissioning women in the officer cadre in 1993 and now inducts them as pilots in various streams. 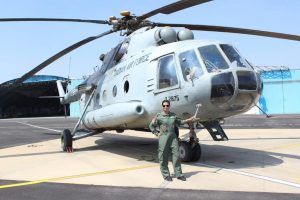 In 2015, the Indian Air Force opened new combat airforce duties for women as fighter pilots, adding to their role as helicopter pilots in the IAF.

Subsequently, in 2018, for the first time, women combat pilots were inducted in the Indian Air Force. Mohana Singh, Bhawana Kanth and Avani Chaturvedi were commissioned at an elaborate Combined Graduation Parade ceremony at the Air Force Academy in Dundigal, Hyderabad.