Inspired by Prime Minister Narendra Modi’s iconic Mann Ki Baat, Surjeet Singh, a 16-year-old schoolboy hailing from a hinterland in Udhampur district of Jammu region, has created a handmade JCB-like machine, which he is planning to use for lifting garbage in his remote village.

A fan of Modi, this mechanical-wizard seems to be inspired by the Prime Minister’s initiatives like Swachh Bharat Abhiyan and Make in India and says that he always wanted to do something for his native Jungle Gali, a sleepy hamlet, some 70 km from the garrison town of Udhampur.

Jungle Gali is yet to get proper roads, electricity or mobile network. But it has mainly been radio, which keeps the villagers updated about the happenings in and around the world. And, Modi’s Mann Ki Baat is something which this class 10th student never misses to listen to on his radio set.

“Mann Ki Baat is really an inspiration for youth like me; and when Modi Ji talks about everything from earthen pots to Make In India, I wondered why should we restrict the achievements to big factories alone, and not to give it a desi touch by contributing something at my level,” the schoolboy says.

Singh says that he used to keenly monitor the working of JCB, used for construction activities. “I tried to understand the mechanics of hydraulics behind this machine. And finally, after months of experiments and the use of locally available resources like wooden blocks, iron rods and springs, I have been able to make a smaller version of a JCB-like machine, which operates manually.” 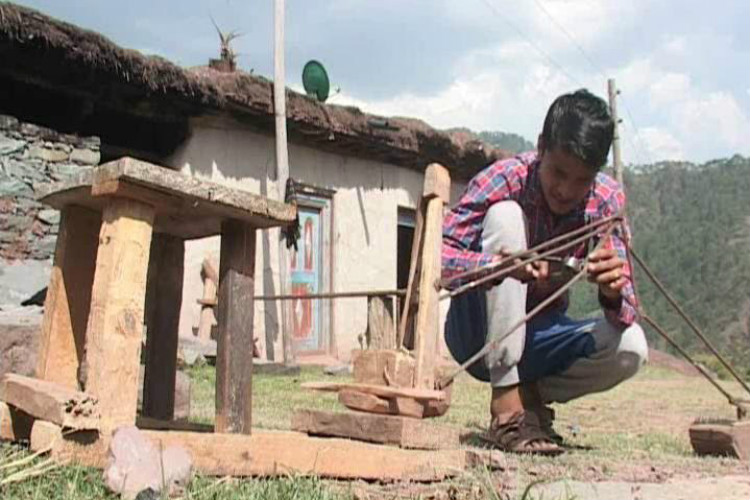 The villagers are happy with his achievement, but Singh seems dissatisfied. He looks ahead to use the machine for “small sanitation works”. “Given the small size and other limitations, my JCB cannot be used for big works, but we can make a beginning by using it to lift some lightweight garbage. At least, that would give a new life to Swachh Bharat Abhiyaan in our village,” he adds.

Singh has a dream to make his JCB more robust. He says if the government helps youth like him with local experiments, such attempts will contribute in making India stronger and more prosperous. Because as of now, this schoolboy lives away from basic amenities, in a hinterland, where even this crude JCB-like device has brought hopes of development!