With shrinking forest cover due to unabated deforestation, man-animal conflict has increased manifold in India. With the loss of habitat, animals often venture into human settlement for food or water. Every year scores of people die and property and crops worth crores of rupees are damaged across the country due to this. A total of 1,557 people were killed due to human-elephant conflict between 2014-15 and 2017-18 (till November 2017).

However, efforts are also being made to mitigate this problem through many ingenuous ways. In one such initiative, a Maharashtra-based farmer has come up with a noble way to keep wild animals off the village limits. Nilesh Shivaji Shinde, a farmer in Khed’s Ranmala village, has built water tanks by using empty barrels, perched on the neighbouring hill, for wild animals, especially leopards, Pune Mirror reported.

The 25-year-old says by providing them easy access to water, he aims to reduce the man-animal conflict in his village. 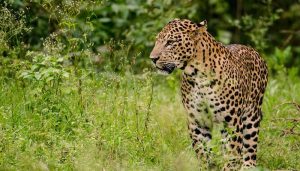 “I built six water ponds in the area to prevent the attacks. I slice the iron barrels into two halves to create the tanks. And this small gesture has been effective as since a month, as since a month, barely one wild animal has entered the village…” he told The Pune Mirror.

Shinde’s efforts have several other farmers to emulate his method. They will now build three concrete tanks on the hillock.

PT Shinde, a primary school teacher and pioneer of tree plantation drive Smruti Vruksha, said, “In the past, there were many man-animal conflict incidents and leopard sightings in this area.These tanks have, in a way, mitigated them by providing water to an array of wild animals.”

Shinde’s village Ranmala was also lauded for its overwhelming participation in the state’s massive tree plantation drive. The villagers planted a sapling on occasions like birth, marriage and death.