‘We are here, you cannot wish us away’ was the call to arms at India’s first-ever LGBTQI+ Pride Walk that sparked a revolution. The Pride Walks that we’re used to seeing first began as a ‘Friendship Walk’ on July 2, 1999, at Kolkata’s Park Circus grounds. Fifteen participants, dressed in identical bright yellow tshirts, that said, ‘Walk on the Rainbow’, led the way for people to come out and openly support the community.

A picture on the front page of a newspaper from 19 years ago with the 15 people at the ‘Friendship Walk’ is now being widely shared on social media. 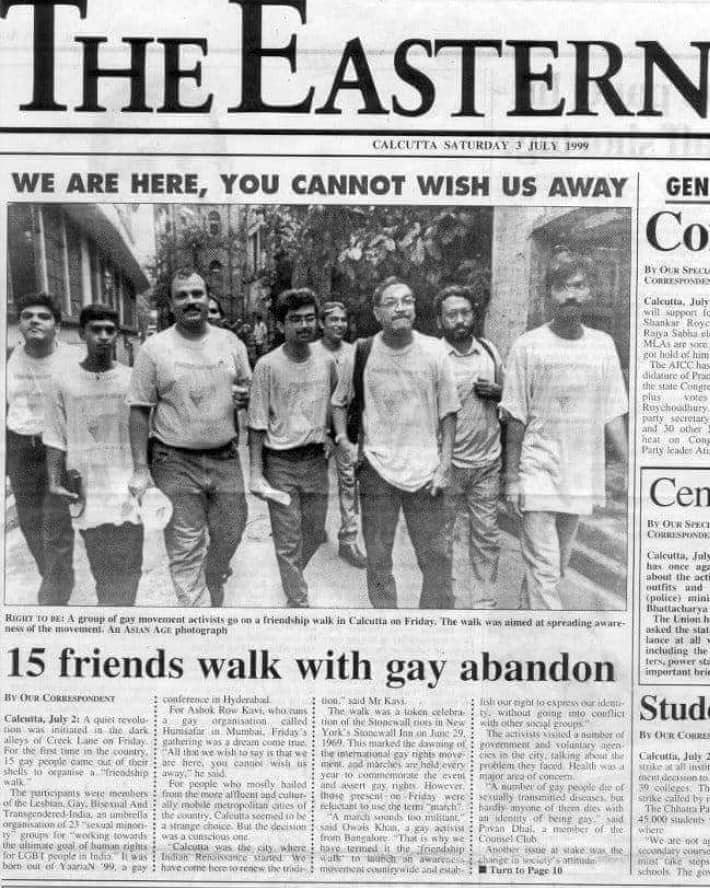 What started as a ‘Friendship Walk’ is now immensely popular as the Kolkata Rainbow Pride Walk. The 15 members of the community circled the grounds before splitting into two groups, one headed towards the north and the other south of Kolkata.

A pioneer of the same sex rights movement in Kolkata, Pawan Dhall, recalled how swelling numbers of particpants has changed the way walks are conducted now. “Last year, the number of participants crossed a few thousands. Several people who are not from the community participated in the walk to express solidarity. When the walk started in 1999, it was spontaneous and there was no requirement for police permission. It lasted about an hour. But as the crowd has grown over the years, we now need police permission and a fixed route,” he said.

Kolkata was the place of origin for a number of movements, therefore it’s small wonder that the first LGBTQI+ march towards equality started in the city. At the first pride march, the 15 members met with the organisations such as the state human rights commission and AIDS control society to spread awareness about the issues pertinent to the queer community.

After the first walk on July 2, 1999 the next march was held in the city in 2003, when it was renamed the Rainbow Pride Walk. The participants doubled as friends and family of members of the LGBTQI+ community joined in to march for equality. Soon after other metros started organising their Pride Walks that later paved the way for smaller cities to follow through.