A video of a pre-teen boy being threatened after apparently being brutally thrashed has sparked a debate on how rights are easily ignored when it comes to children. The video, posted by a Facebook user, shows a pair of hands holding the boy tightly while people interrogate him. The boy trying to wrestle free the entire time.

Kolkata resident Indrani Chaudhuri, who is also an eyewitness of the episode, shared the video on Friday. The kid was allegedly beaten up by a staff of an establishment called Wise Owl, located in South Kolkata’s Hindustan Park area. On Friday, around 8 pm, the young boy had allegedly approached a group of women, who were sitting in the outdoor seating area of the cafe. 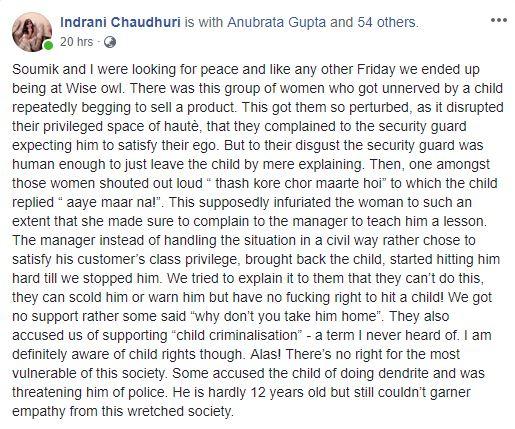 Chaudhuri narrated the episode to InUth over the phone. She said, “The boy was just being persistent about buying something from him. The group of women clearly couldn’t stand the young boy’s presence. So they complained to the security guard, who politely asked the boy to not disturb them. However, these group of women were clearly perturbed and yelled at him saying that he should be given a beating, to which the boy simply responded saying, ‘Why don’t you try beating me?'”

This, Chaudhuri claims, is what angered the women who complained to the staff of the cafe. “The boy may have made that remark but he left the place immediately after. But Wise Owl’s staff member, Hriday Sankar Pati, asked the boy to come back just so that he could beat him up. This was their way of teaching him a lesson. In which civilised world is this fair? We tried to explain that this was no way to treat a child, but people instead accused us of supporting criminal children like him,” she said. 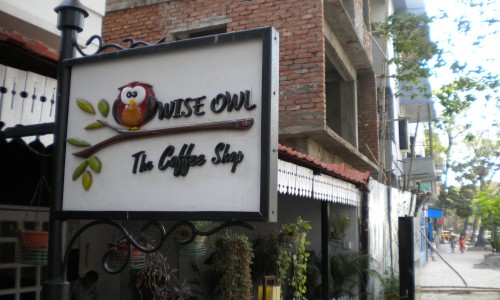 The post is now being widely shared, especially among furious Kolkata residents, who vowed never to step foot into the establishment again. When contacted, Wise Owl manager Hindol Basu presented a different version of events and in turn blamed Chaudhuri and her friend for being unaware of what really transpired.

“There are more boys like him who often bother our guests so we know their faces very well. A few of them are known drug addicts. When the women complained, one of our staff asked the boy to leave and later simply advanced towards him to intimidate him. The person who made the post and her friend came at that time and got into an argument with our staff. They later took videos of the incident and even threatened to tarnish our reputation,” Basu told InUth in a phone conversation. He also claimed to have filmed the ‘correct version’ of what happened (a copy of which is now in InUth’s possession).

The cafe even put up a statement on Facebook:

Before leaving the scene on Friday, Chaudhuri called Childline coordinator Chandan Dey, who said, “We have already sent an official to investigate the matter. The police have to be involved in such cases and the Gariahat police station will be informed. We have to first figure out what happened before we decide how to handle the case.”