While wars are NEVER welcome, some wars are inevitable. The Kargil war in 1999 between India and Pakistan was one such. It’s been 18 years since the war ended, but the memory of bloodshed of our soldiers still remains fresh in our minds. It was the summer of 1999, when the country fought its fourth war with Pakistan in Kargil.

Among those who were martyred were soldiers who were very young, many were not even 30 years of age when they died fighting on the war front. It was their passion and love for their country that made them sacrifice their lives. Here are some of the stories about such martyrs from the Indian Army, that’ll make your eyes numb.

He was an avid sports person since his early years. However, it was the love for his country and the defence forces that prompted him to join the Indian Army. Pandey participated in multiple attacks during the Kargil war, but one particularly bright feather in his cap was clearing Jubar Top.

Jubar Top was a strategically important point for India during the war. The Captain, who showed immense courage, however, succumbed to the wounds incurred during the war. He was posthumously awarded the Param Vir Chakra.

Born in a family where everyone was associated with Indian Defence, his great-grandfather Dr Captain Karta Ram Thapar, JS Thapar (Vijayant’s grandfather) and his father Colonel VN Thapar, Vijyant too decided to devote himself to the nation.

He was commissioned in the Indian Army on 12 December 1998. The 22-year-old Captain Vijyant Thapar lost his life while leading an attack of his infantry regiment – 2 Rajputana Rifles on 29 June, 1999.

He was posthumously awarded the Vir Chakra by the President of India. 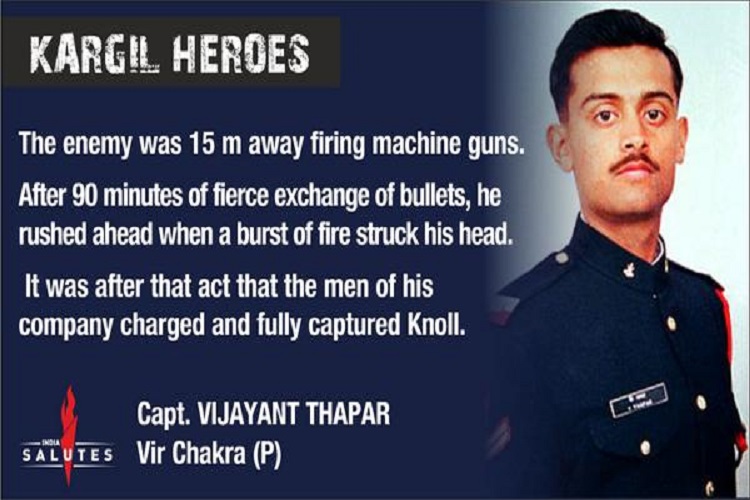 Hailing from Nagaland, the 24-year-old Captain was part of ‘Operation Vijay’. He volunteered for a commando mission that involved scaling a cliff and attacking the enemy’s machine gun bunkers. At a height of 16,000 feet, his shoes lost grip and he had to ward them off, despite the temperature being at -10 degree Celsius at that time. This made things extremely bad, but not enough to mar the Captain’s progress.

By the time a bullet hit his body, he had done more than enough to clear the way for other soldiers to end what he began.

“I’ll either come back after raising the Indian flag in victory or return wrapped in it, but I will come for sure.” These were the last words from Captain Vikram Batra.

Born on September 9, 1974, in Himachal Pradesh, Batra earned a place in the Indian Military Academy, Dehradun in 1996. He led one of the toughest operations in mountain warfare in Indian history. He was often referred to as ‘’Sher Shah’’ (“Lion King”) in the intercepted messages of the Pakistan Army.

It was the daring capture of the crucial peak pint 5140 during the war that brought Batra into the public attention. After he neared the peak, the enemy started firing from machine guns. However, under his command, the troop managed to topple the enemy’s post. Captain Batra sustained severe injuries during the attack and subsequently died. The nation honoured him with the Param Vir Chakra. 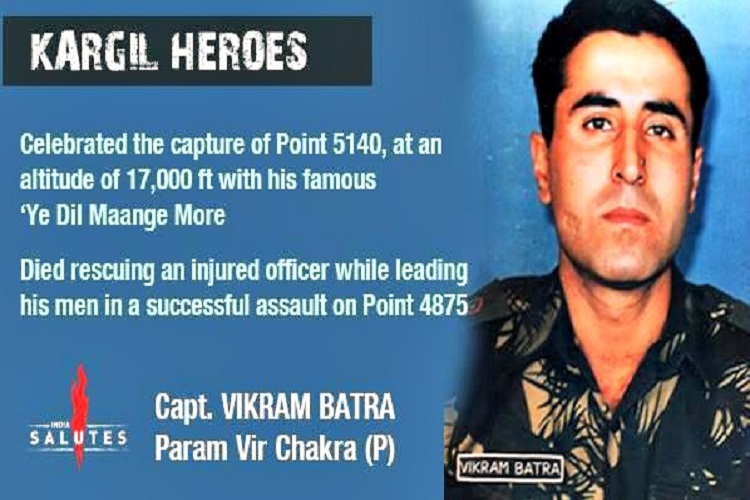 When Captain Anuj Nayyar died fighting for his nation, he was just 24. During the war, it was the Captain’s mission to secure Point 4875, known as Pimple 2. He killed 9 Pakistani soldiers and successfully destroyed three medium machine gun bunkers. However, while clearing the fourth bunker, an enemy grenade fell directly on him, which led to his death.

The courageous Major laid down his life for the country while re-capturing the Point 5140 that dominates the Srinagar-Leh highway at 17,000 feet along the Tuloling Ridge Line. During the combat with Pakistani troops, Jasrotia showed exemplary commitment in evacuating his injured soldiers, but unfortunately, a mortar shell landed near him that injured him seriously.

Due to his efforts, several of injured soldiers survived. But the 28-year-old young Major lost his life and attained martyrdom.

His fate is one of the most tragic episodes in the story of Kargil war. He along with other soldiers was captured by Pakistan Army and for 22 days, he was subjected to third-degree torture. He along with Sepoys Arjunram Baswana, Mula Ram Bidiasar, Naresh Singh Sinsinwar, Bhanwar Lal Bagaria and Bhika Ram Mudh of 4 Jat Regiment, had their ear drums pierced with hot iron rods. Their eyes punctured and genitals were cut off by the Pakistani troops. Their limbs were chopped off, teeth broken, skull fractured, nose and lips cut off. The autopsy of the bodies had revealed that they were burned with cigarettes butts.

The heavily mutilated bodies of the Indian soldiers were sent back to India on June 9, 1999. To this day, justice has not been granted in the case.