In the words of renowned Indian author Raja Rao, Kamaladevi Chattopadhyay was “perhaps the most august woman on the Indian scene today. Firmly Indian and therefore universal, highly sophisticated both in sensibility and intelligence, she walks with everyone, in city and country with utter simplicity.”

Born on 3 April 1903, Kamaladevi was the fourth and youngest daughter of Ananthaya Dhareshwar, the then District Collector of Mangalore and Girijabai, who hailed from an aristocratic family of Karnataka. Her childhood was dotted by a series of tragedies. She lost her elder sister Saguna who got married in her teens. She lost her father when she was just seven years old. Her father had not written a will, so the family wealth and properties went to a step-brother with whom there was little contact. So, Kamladevi grew up at her maternal uncle’s place who himself was a noted social reformer and was visited by the likes of Mahadev Govind Ranade, Gopal Krishna Gokhale and women leaders like Ramabai Ranade. Her interactions with these luminaries helped sow the seed of political consciousness. 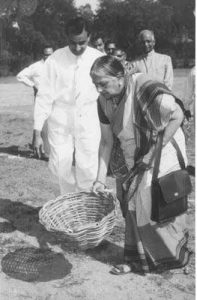 She was married off in 1917 at an age of 14 but lost her husband two years later. However, her father in law was liberal-minded and encouraged her to continue her education. After finishing her school, Kamaladevi joined Queen Mary’s College in Madras where she befriended Suhasini Chattopadhyay, younger sister of Sarojini Naidu. It was through Suhasini that Kamaladevi met Harin’ Chattopadhyay. Their mutual interest in the art brought them together and they tied the knot in 1923, much to the opposition of orthodox Hindu society. The couple left for London where Kamaladevi joined Bedford College, University of London, to pursue a diploma course in Sociology. They later parted ways amicably and their divorce marked the very first legal separation granted by the courts of India.

Foray into Theatre and Cinema

Along with her husband, Kamaladevi performed across India, experimented with folk theatre and regional drama, and even acted in silent films. In that age it was considered unsuitable for a woman from respected family to act in films. She acted in the first silent film of Kannada film industry, ‘Mricchakatika'(Vasantsena) (1931), based on the famous play by Shudraka. 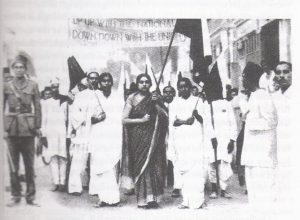 Like many of her contemporaries, Kamaladevi was drawn into freedom struggle on call of Mahatma Gandhi in early 20s. She returned to India in 1923 and joined the Seva Dal, a Gandhian organisation set up to promote social upliftment. Her dedication soon put her in charge of the organisation’s women’s department that recruited and trained women of all ages across India to become voluntary workers. In 1926, she achieved the unique distinction of being the first woman in India to run for a legislative seat. She competed for a seat in Madras Legislative Assembly and lost by a narrow margin of 55 votes.

Kamaladevi was a great admirer of Mahatma Gandhi but she differed with his decision to exclude women from the initial gathering of marchers. Kamaladevi was charged with violation of the salt laws and sentenced to a prison term. She entered the Bombay Stock Exchange to sell packets of ‘freedom’ salt and was sentenced to a prison term for violation of the salt laws. In 1940, she began a world tour to present India’s situation to other countries and drum up support for Independence after the war. She interacted with African-American civil rights activists and wrote for several American publications. She would tell her audiences in the US: “You are fighting the patriarchy, we are fighting imperialism.”

Through her long involvement in the freedom movement, she never shied away from opposing her own colleagues if they infringed on or ignored women’s rights. In dozens of writings and speeches, she highlighted the hurdles faced by women that were both peculiar to Indians and common to women everywhere. She attended the International Alliance of Women in Berlin in 1929, and became aware of how race and national boundaries might become obstacles to the solidarity of women.

Kamaladevi was a prolific author and wrote some 20 odd books, many of which drew from her personal experiences during visits to foreign countries. Her work reflected the unimpeachable evidence of the wide array of her intellectual and political interests and a global outlook which shunned narrow nationalism and a superficial cosmopolitanism. She also wrote widely on the US, with her books, Uncle Sam’s Empire and America: The Land of Superlatives. 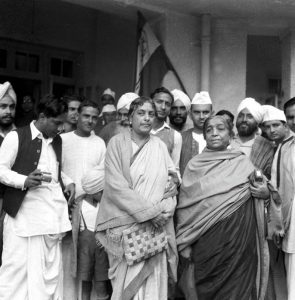 After India earned its hard fought independence, Kamaladevi refused the lucrative offers of posts such as ambassador, Union minister, the governorship and even vice-president to devote herself to humanitarian causes. Post partition, she sketched the rehabilitation plan for the tens of thousands of post-partition refugees.

Honours
The government of India honoured her with the Padma Bhushan in 1955 and later, in 1987, with the Padma Vibhushan. In 1966, she was conferred with the Ramon Magsaysay Award for Community Leadership. The iconic woman passed away on October 29, 1988, at the age of 85.