“When I was young, my father would tell me all these stories about Vrindavan. I only remember two of them now — one about a golden coconut tree and another about elephants,” says 83-year-old Basanti Chakravorty, sitting on the porch of an Ashram where she has lived for over a decade. “I wondered back then what Vrindavan was all about. I had always wished to see it for myself once.”

Basanti retraces the events that brought her to Vrindavan— The City of Widows. “My husband passed away sometime after 2000. I don’t really remember the exact year. He was an alcoholic and I did not love him one bit,” she says dispassionately.  She raised all three of her kids — one son and two daughters — by herself. With her children settled, she left her home in Dakshin Barasat, a village in West Bengal. 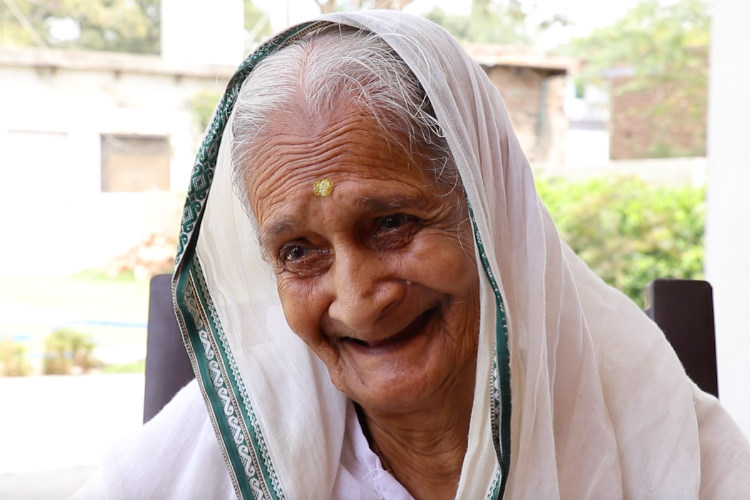 Located in the Mathura district of Uttar Pradesh, Vrindavan is historically renowned as the place where Princess of Mewar Mirabai devoted herself to the reverence of Lord Krishna. Discernible by the chant of “Radhe Radhe” and the whiff of fresh dairy wafting through its streets, Vrindavan is home to nearly 20,000 widows.

The town is a retiring spot for many widows, who have been shunned by their communities across different parts of India. Majority of the women hail from West Bengal and Odisha, most of whom have been forced out of their homes.

Mahananda (63) had a happy marriage, but her life changed course after her husband’s demise 12 years ago.

“After my husband passed away, I lived with my son. I didn’t get along with my daughter-in-law though. She and I would fight a lot. My son was kind. I kept feeling that somewhere my presence was affecting their marriage.” Mahananda left her home in Maharashtra and moved to Vrindavan three years ago. “I didn’t want to leave him, but I had to,” she says, breaking down into tears. While she tries to drown the memories of her home by keeping herself busy with bhajans (prayers), the thought of her son barely eludes her. 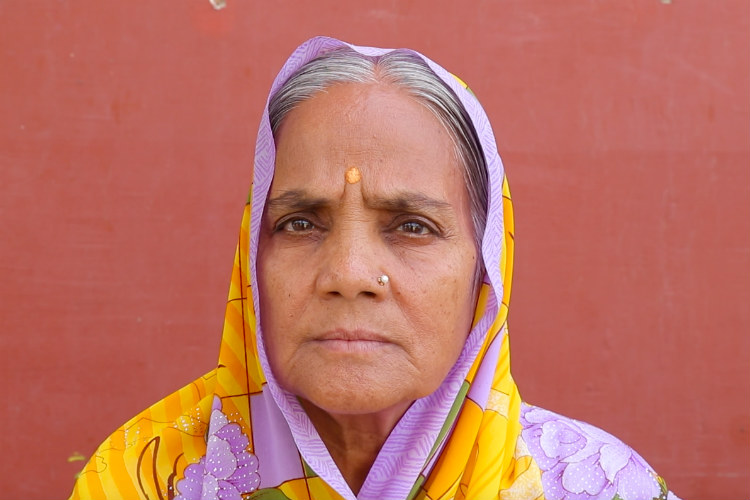 Married at the age of five, Shanti Tiwari (77) never met her late husband, who passed away as a teenager. Pushed into widowhood at a young age, she never left her parental home. Shanti was discreet about her journey to Vrindavan, she didn’t want anyone in her family to know about her escape.

A walking stick and a hunched back have restricted her mobility. She says, “I never remarried after my husband passed. Remarriage is a fairly new trend but our community does not allow it. Now, I don’t want anything out of life anymore. I just want to die.” 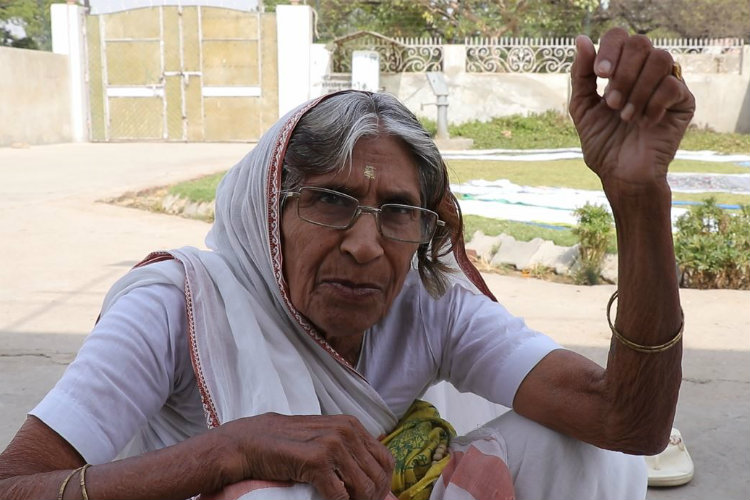 Torn away from their lives, these widows are given shelter by the Maitri Vidhwa Vridh Ashram, run by Delhi-based NGO Maitri. It is one among the many ashrams in the holy city that work towards restoring their dignity.

70-year-old Savitri Dasi moved from Madhubani, Bihar, two years ago, after facing abuse from her son and her daughter-in law. “They would abuse and hit me because they thought I was spoiling my grandchildren. They even broke my leg,” says Savitri. She now spends her days working as a seamstress.

When asked if she would like to see her kids again, Savitri refused. “I never want to go back. I don’t wish to go home anymore.” 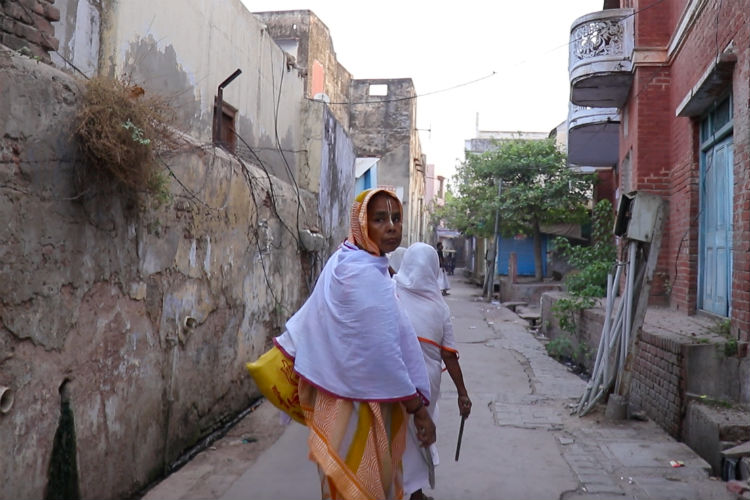 Widows leaving for an early morning prayer at the bhajanashram (Courtesy: Shamita Harsh/InUth)

65-year-old Tarang Bai, who was married at the age of 14, was abandoned by her husband at the age of 36. “He didn’t like me very much, so he moved on to a woman of his choice,” she says.

Separated from her husband, Tarang Bai may not be a widow, but she has made a home out of Vrindavan. “After my parents died, I lived alone for 10 years in their home. After spending those years by myself, I was tormented and decided to move here.”

“In my community, people do get remarried, but I didn’t want to get married again,” she smiles. “I have already suffered once because of a marriage and I didn’t want to put myself through that again.” 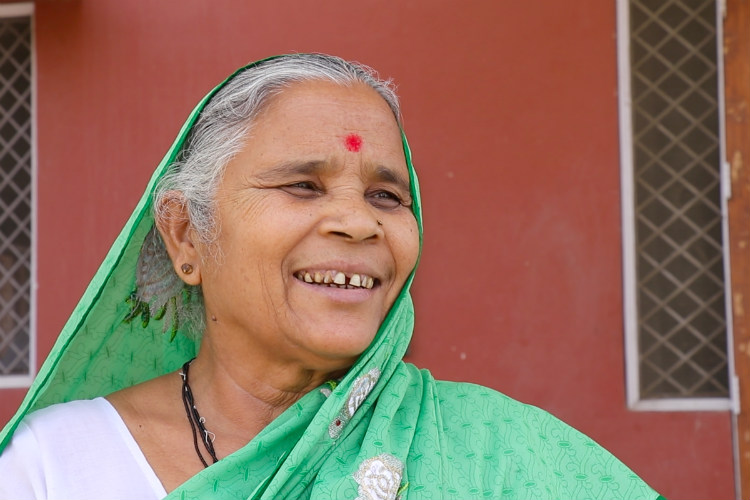 In May 2012, the Supreme Court had appointed a seven-member panel to conduct an enumeration of the widows in Vrindavan. The decision came following a PIL which highlighted their “pathetic” living conditions. The widows of Vrindavan are paid Rs 18 per day for participating in bhajans for seven to eight hours a day. But there has been no update so far*.

Meanwhile, the widows of Vrindavan continue to live with their acceptance of ostracism and penury.

73-year-old Ashalata was kicked out of her own home. “Following my husband’s demise, my boys took over the household and chased me out.”

Married at the age of 19, she was widowed 25 years ago. After a tiresome journey from her home in Shantipur, Nadia (West Bengal) to Vrindavan, Ashalata is adamant that she would never leave the town. “ Going back to my kids would only lead to a fight.  I will never go back. Ever.” Like several others, Ashalata has grown attached to this place she has been calling home. The other widows are the only family she has and she hopes to keep it that way.

*We reached out to the National Commission for Women (NCW) to receive an update on the enumeration process. The article will be updated as and when we receive a response.