The top 10 per cent of Indian population hold as much as 77.4 per cent of the total national wealth, an OXFAM study on inequality said on Monday.

Indian women are hardest hit by this rising income inequality as they continue to receive less wages as compared to their male counterparts for the same work, the report found.

Women Are Paid Less Than Man

The report  said, in the workplace, women still receive 34% less wages than their male peers for the same amount of work.

Underlining that only 9 women feature in country’s 119-member billionaires club, the report also said that women are the hardest hit as we go down the social ladder.

“When governments reduce their expenditures on essential public services such as education and healthcare, women and girls are the first ones to lose out on these services,” according to the report.

In India, girls belonging to families in the top 20% get nine years of education on average, while girls from families in the bottom 20% get none at all. Even those who make it to school are often pulled out when money is tight, the report said. In addition, more than 23 million girls drop out of school annually because of a lack of toilets in school and proper menstrual hygiene management facilities. 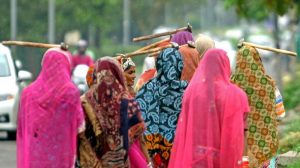 “This disproportionate burden of unpaid care work by women means they lose out on opportunities to participate in paid labour or are forced to undertake paid labour leading to their time poverty and loss in well-being,” the report said.

Citing a 1,000-household survey undertaken in the states of Bihar, Jharkhand, Chhattisgarh and Uttar Pradesh, OXFAM said 53 percent of those surveyed said it was acceptable to harshly criticise a woman if she failed to care well for the children and 33 percent felt it was acceptable to even beat a woman for this reason.