Days after drawing flak for writing castes of SC/ST candidates on their chests, the Madhya Pradesh government is at the centre of another rousing controversy. In gross violation of rules, the medical test of female candidates who have applied for the post of constable in the state police was conducted by male doctors at a government clinic in Bhind on Tuesday. Shockingly, the medical test of both male and female recruits was also conducted in the same room.

During the examination, the men were asked to strip in front of 18 female candidates. The pictures available show men standing in a queue and wearing nothing more than their underwear while an official goes about noting details, News18 reported. 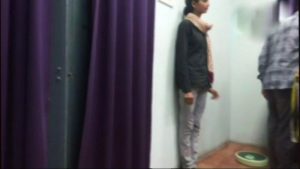 Surprisingly, no women doctors or nurses were present where the female applicants were undergoing tests. The matter came to light after someone recorded a video of the incident and shared it on social media.

A total of 217 police recuits had to undergo medical examinations in Bhind while it is not ascertained how many of them were women.

The authorities have launched an inquiry into the matter and issued show cause notices to five doctors present at the clinic.

“We have issued warning letters to all the team members of the examination committee. We have also ordered an enquiry and whoever is responsible will be punished.” NDTV quoted Dr Ajit Mishra, Civil surgeon, Bhind district hospital, as saying.

He conceded that there had been a lapse, adding that a female doctor has been assigned the duty and other arrangements have also been made for a proper medical examination of woman constables.

The latest embarrassment comes close on the heels of another incident in Dhar district where candidates appearing for the post of police constable had their castes stamped on their chests during the physical examination on April 28.