A Madrassa in Kerala’s flood-hit Wayanad has opened its door for the students of a government school which was destroyed in the deluge.

The government lower primary school at Kurichiarmala was swamped with three feet mud and slush when the authorities started the clean up drive, recurring landslides forced them to abandon the idea.

Sending a message of communal harmony, the local mahal committee stepped in and offered space in the Hayathul Islam Madrassa building for school to continue with the classes. Local residents and volunteers swung into action and made necessary arrangements on the top floor of the building, Times of India reported.

They converted the top floor into a full-fledged school with four classroom and a staffroom in 72 hours. As many as 92 students started school on the top floor of the madrassa, barely a kilometre away from their school that lies in mud. 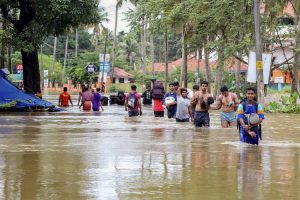 A fortnight ago, another Madrassa located in Kozhikhode district’s Perambra, turned its spacious interiors into a home for those affected by the flood. Almost 120 families including 470 men, women and children took shelter in the Hujjathul Islam Madrasa which was turned into a makeshift relief camp.

The madrasa also organised daily meals for the evacuees who have been sheltered within its confines.

“The madrasa gave out an evacuation warning after water levels rose in the nearby areas on Sunday. Since then, more and more people have been coming to the camp,” Ajay Kumar, a local who has been helping the madrasa, told News18.