Last year, Andhra’s Nagarampalem police station got a face-lift worth Rs 1.2 crore as it was named the first model police station in the state aimed at making law-enforcing agencies public-friendly.

However, a picture of a cop beating a woman with a hunter in the same police station is being widely shared on social media raising questions over effectivenes of such initiatives.

Head constable Venkateswara Rao, who was reportedly in an inebriated state, was caught on camera beating a woman allegedly involved in sex trade with the hunter .

All the women were remanded to judicial custody on Monday noon.

“I have conducted preliminary enquiry and found that the head constable was in drunk condition. Though he was not on duty, he picked up the women wanted in organised sex racket and brought them to the station around 11 on Sunday night. He picked up the hunter and beat one,” Nagarampalem police inspector Y Sridhar Reddy told Mumbai Mirror. 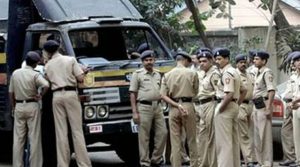 Meanwhile, Rao has been suspended from duty pending further enquiry.

According to Section 46(4) of the Code of Criminal Procedure, a woman cannot be arrested after sunset and before sunrise. As per the provision, such arrest can only be made in exceptional circumstances, and that too after a woman police officer obtains prior permission from Judicial Magistrate.

Then Andhra DGP Sambasiva Rao had also claimed that the male and female police officers at the station had undergone gender-sensitive training and aimed to indulge in people-friendly policing.

The cops at model police stations had undergone gender-sensitisation training which was aimed at making them more people-friendly but the latest incident raises serious questions about the effectiveness of this exercise.