This is a first of its kind initiative by a civic body in West Bengal and probably the entire country, which is aimed to minimize the possibility of crime against women.

The academy, according  to Times of India, would impart martial arts skills including karate, judo and taekwondo to the girls, empowering them to face any adverse situation.

Speaking with the daily, SDDM chairman-in-council member Pradip Kumar Majumder revealed that the civic body is in touch with a number of martial arts coaches, who will impart the self-defence training. 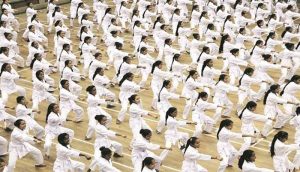 “We plan to start the academy from April with about 100 schoolgirls. The girls need not be residents of areas under the South Dum Dum municipality; those from adjoining areas are also welcome. The academy will be run and managed by the civic body’s sports and youth affairs department,” he told the daily.

The TOI report also said that girls will be charged a nominal fees and those from economically disadvantaged family will be trained free of charge.

The civic body plans to engage more schools in the area so that they can further pass their skills to other girls.

Notedly, Kolkata Police’s self defense programme ‘Sukanya’ has been running successfully, with several hundred school and college girls getting enrolled.