Ever since Facebook page Humans of Bombay started, it has been the source of the kind of stories that have the power to turn our hearts into a puddle instantly. The idea to chronicle regular lives may have come from its American counterpart, photographer Brandon Stanton’s Humans of New York page, but the stories were desi, were ours, were relatable.

Who would have thought that the page started by then 21-year-old Karishma Mehta would grow into a nationwide phenomenon and birth iterations in other cities in India. So it’s hardly surprising that the Prime Minister of India, someone known for his humble beginnings, be featured on the Humans of Bombay page.

But if you’re curious about how India’s prime minister, whose home state is Gujarat, was featured on the Humans of Bombay Facebook page, it’s because Modi always wondered about Mumbai. “I would hear some traders speak about ‘Bambai’ and wonder, ‘Will I ever get to see the city of dreams?’ I was always curious – I would go to the library and read everything I could get my hands on,” he said in the post.

The post, which at the time of writing this, had 3,800 reactions has also been shared 456 times. The comments, however, are a mixed batch of love and hate. 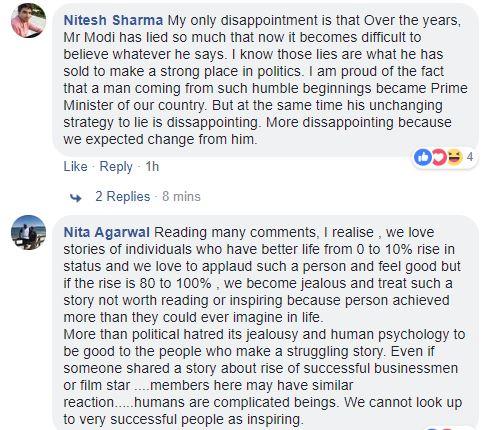