Hundreds of students of SRM University (Sri Ramaswamy Memorial University) marched Thursday evening  in protest against the alleged sexual harassment of a woman student at its Kattankulathur campus in Tamil Nadu.

The victim, a second-year undergraduate student at the SRM Institute of Science and Technology, was allegedly sexually harassed by a staff member in one of the blocks of the girls hostel.

” The incident happened around 2 PM yesterday when the victim took a lift to reach her room on the fourth floor and suddenly this guy who employed at the SRM hostel masturbated at her in the lift.” a woman student told inuth.com.

The student had pressed the 4th floor button but the accused pressed button for the 6th floor then her further moved the lift to the 8th floor. 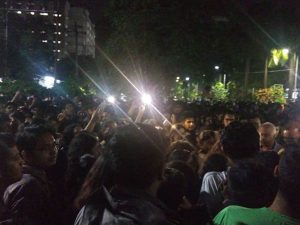 When the victim reported the matter to the warden, she pinned the blame on the girl and told her not to wear short dresses and cover herself to avoid such incidents in the future.

The warden said that the dressing sense of north Indians is not acceptable in south India. The victim was further told to stay mum on the issue, she added. The victim-shaming of the student spread like wildfire with hundreds of students coming out in support of the victim deriding the administration for their deep-rooted gender bias and demanding immediate arrest of the accused.

Meanwhile, police have registered a case under sections 354 (outraging the modesty of women) and 294(B) (abusing) of the IPC and arrested the suspect, identified as Arjunan Subramanian, 28, of Chetti Punniyam village. The accused has also been sacked from duty. Students circulated videos and photographs of the protest on the social media. However, a video where the varsity’s vice-chancellor Sandeep Sancheti is seen scolding students for ‘making a issue out of nothing’ has grabbed eyeballs. The VC said he was just laughing at the way a student was speaking. “Don’t try to make an issue out of nothing. I was laughing at this person’s behaviour because you are unable to speak properly”.