In the last week of October, Aijaz Ahmad Andrabi ordered six beddings, cooking gas, utensils, and a few more things at his office. He installed geysers in the bathroom as well. He made sure office served as a comfortable home for his staff for some time to come. Aijaz is the principal of Mehjoor Memorial Government Boys Higher Secondary School in Pulwama, a district located 30 kilometers south of Srinagar in the Kashmir Valley currently enveloped in hostility.

After the killing of Hizbul militant Burhan Wani, the Valley erupted in unrest, which spilled over to the targeting of educational institutes by unidentified men. More than 30 schools have been set ablaze so far. Panic-stricken Aijaz called a staff meeting towards the end of October as the turbulence intensified. “I asked my teachers what to do,” he said. “They took it upon themselves and volunteered to protect the school.”

A beautiful rectangular one-storied structure painted in vibrant orange color is since being guarded by its teachers and non-teaching staff in shifts of six. With 1200 boys and 60 staff members, it is one of the important schools in Pulwama. “We devised a roster following the staff meeting,” said Aijaz, 59, who is well respected in Pulwama and has been the principal for the last 6-7 years. “We made a list of the things we needed to buy and shopped for them. The staff has been guarding the school since October 25 in batches. Each one spends 24 hours with the shift starting at 10 AM.”Immediately after the initiative, the government issued a circular in November, which

Immediately after the initiative, the government issued a circular in November, which deputed teachers to guard their respective schools across the Valley. The move came under severe criticism for reducing teachers to chowkidars. Moreover, commentators said it defied logic to make teachers vulnerable by making them do the job of armed security forces.

Aijaz said the criticism is not unjust.

“Teachers are supposed to teach. “Their job is not that of a watchman. It is not fair to force it upon the teachers. My staff has volunteered to do it and we would have done it irrespective of the government orders.”

Many of the teachers are also alumni of the school, said Aijaz, and most of them live nearby, which makes it relatively easier. “They have been my students,” he said. “We have an emotional attachment with each other and with the school.”

The team guarding the school around the clock even includes the vice-principal, along with teachers and peons.
The voluntarism is commendable but the teachers spend their days and nights at the school with a weird combination of scenic beauty and palpable insecurity. A teacher who did not want to be identified said even though no security concern has arisen so far, “you never know what might happen next”. “We live in perpetual fear of uncertainty,” he said.

“We cannot imagine the sight of our school up in flames, which is why we are here. But police is not guarding any school in the area while teachers and staff members stand as watchmen.”

“We live in perpetual fear of uncertainty,” he said. “We cannot imagine the sight of our school up in flames, which is why we are here. But police is not guarding any school in the area while teachers and staff members stand as watchmen.”

In Pulwama, a significant number of schools continue to be without security guards. The middle and primary schools established before 2011 reportedly have the luxury of a watchman, because that year the government discontinued the practice of engaging paid employees to guard schools. 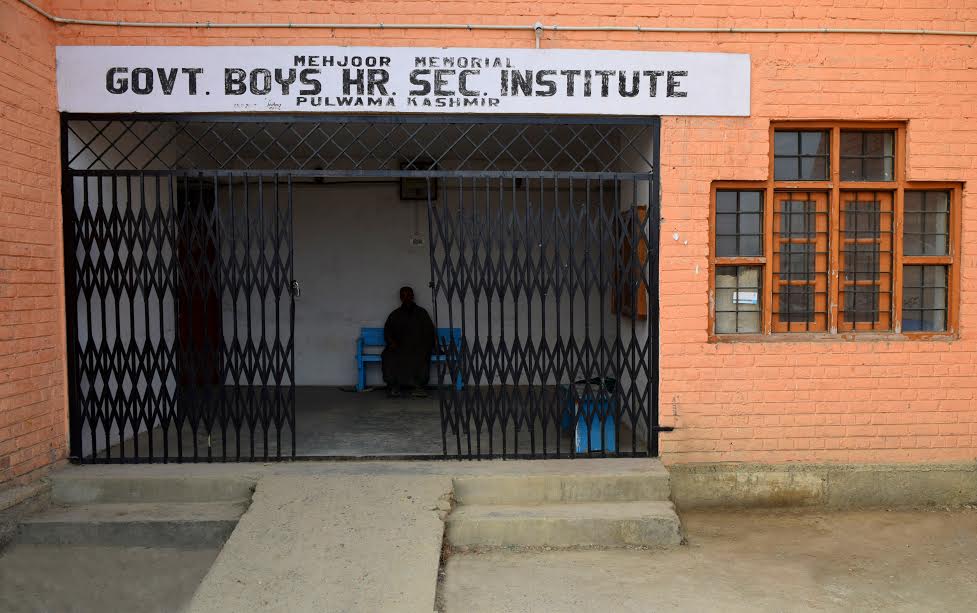 Aijaz said the Chatepora area, where the school is located, had been extremely volatile during the endemic of school torching. “But people in the vicinity wholeheartedly supported our efforts,” he said, adding that normalcy is slowly creeping in with the smooth manner in which the exams were conducted last month being an indicator. “Touch wood,” he promptly said.

Even though normalcy – a word never as relative as it is in Kashmir – has started tiptoeing back in the lives of Aijaz and his staff, he said the vigil would continue, as the situation is still far from being secure. Simultaneously, though, the temperatures in the Valley are reducing ominously. The nights are particularly unfriendly in terms of weather and there are chances of snowfall as well. How long would they be able to continue with their vigil? “As long as the situation demands,” Aijaz said.