According to Quartz.com, the store is witnessing an average footfall of 28,000 visitors daily since its inauguration on Aug 09. The huge rush, apparently, prompted the IKEA team to subtly convey to the customers that they are here to stay through out the year. 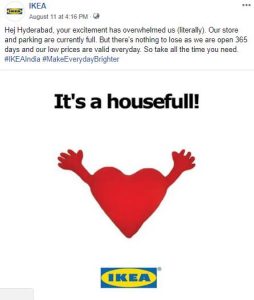 Apart from offering world class furniture, IKEA also opened a 1,000 seat restaurant in its vicinity which has also become a major attraction for the visitors. And the thought which went behind opening of the food court is quite amusing. IKEA’s founder Ingvar Kamprad believed that since the store is in the city’s outskirts, it will take time to reach there and shop. “It’s difficult to do business with someone on an empty stomach,” the Economic Times quoted him. 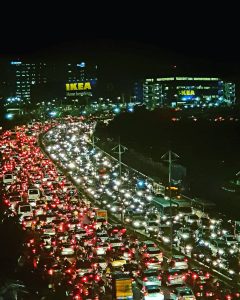 On Independence Day as well, the customers had to wait in the serpentine queues for hours just to gain entry into the store.

Another reason that led to a huge turnout was the months-long promotional effort by the furnishing giant. Apart from a well-planned social media campaign, IKEA reached out to the people through front-page newspaper ads and large hoardings across the city.

The Swedish giant eventually came to India after the government’s nod to 100% FDI approval for a single brand retailer in India. The company now plans to open 25 outlets by 2025. The store hosts over 7,500 products and employs 950 people of which 90 per cent are locals, half of whom are women. The next store is going to open in Navi Mumbai by 2019. The global brand is expecting six million visitors at its Hyderabad store in its first year. IKEA has already  acquired land in Karnataka and Delhi-NCR and is planning to expand its footprint in these cities as well.