21-year old Abhay (name changed), sporting a Zomato T-shirt is getting ready to deliver a McDonald’s meal. This is just the beginning of the peak-demand hours. He has no choice but to head out at 12:30 in the afternoon when the Air Quality Index hovers somewhere between 450-500 in most Delhi and UP cities. He arms himself with his helmet and ties a handkerchief around his neck to ensure he has something to cover his face with in case the air becomes unbearable to breathe. Delhi-NCR has been under a severe smog attack for the past four days and life has been doubly difficult for Abhay. Navigating the 7 km radius around Sector 18 market has always been tough – pollution, road rage, traffic jams. But the smog has taken a toll on his health. It has left him with a burning  sensation in the eyes and occasional breathing problems.

Abhay is among half a dozen Zomato employees who squat under a Gulmohar tree in the bustling Sector 18 Noida market, when they have no orders to deliver. So even when they are not on a bike delivering food, they are still outside, breathing the poisonous air for they have nowhere to park themselves.  On an average, they travel at least 50 km spread across 15 trips to deliver  food orders. Smog or no smog, their bikes must hit the streets to satiate the hunger pangs and taste buds of people like us- who work inside the safe spaces of our Air Conditioned offices or have the option of taking a work from home owing to pollution.

“I have been facing severe eye pain and breathing problems. In fact, even when we are not on our bikes delivering food, we breath this polluted air. The shade of this tree is our work-station. ” says Abhay  who gets a salary of Rs 18,000 per month, something that is not sufficient given that a substantial part of his salary goes into buying petrol and maintaining his bike, in case of an accident. 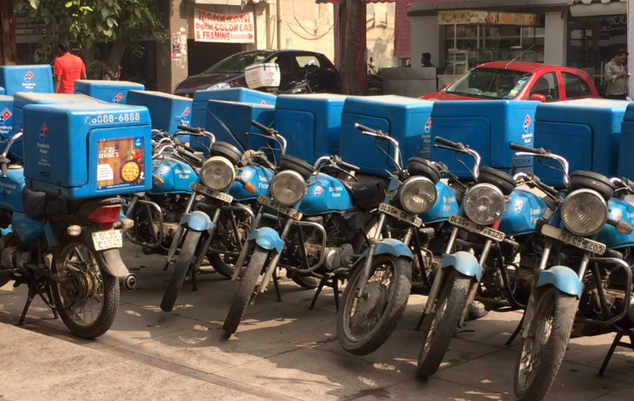 When asked if they have requested their employers to provide them masks or any other safeguards, they say “no” in a quivering voice. They are scared that such “irrational” demands might cost them their jobs. “Who knows they might just ask us to leave. We don’t even have winter jackets and the weather is getting chillier. How do you expect them to provide us with masks? They have a very arbitrary process of dismissing delivery boys. They just deactivate your account and then you are done,” says one delivery boy.

Apart from auto-rickshaw drivers and rickshaw pullers, delivery boys are one of the most vulnerable groups to have been badly hit by the smog crisis. They do not have an option of working from home, like most of us. They have to ride a two-wheeler, not much of a choice there either. And they can’t refuse an order just because they might be finding it difficult to breathe. Their livelihood depends on being on road, riding their bike.

This has been a concern some shared even on Facebook. Chairman of Career 360 Peri Maheshwar took to Facebook to highlight the plight of a Zomato delivery boy.

We also spoke to Domino’s pizza delivery boy and another delivery boy from Amazon India. All of them have the same story to share. They have been feeling severe burning sensation in their eyes for the past few days. Some of them have suffered breathing problems as well. But they don’t expect the companies they work for to provide them with any safety measures. “It’s a matter of three to four days. Today the weather has cleared a bit. I got myself a pair of goggles to avoid the burning sensation in my eyes which has been troubling me for the past few days. I really don’t expect the company to give me masks, ” says Amazon India delivery boy, who makes at least 60 trips a day. He is not on the company’s rolls on a fixed salary. He gets his payment based on the number of packages he delivers. So more the number of trips, the better is the money.

With Delhi pollution and smog being a problem which intensify during winters, it’s time along with providing seasonal gears, e-commerce companies start taking some measures to protect these delivery boys from the ill-effects of smog.

We have reached out to these organisations through their customer care service. The story will be updated as and when we get their response.