How many times have you actually asked for the price rate while ordering food in the railways? Have you ever checked the actual price or pay the amount the caterers ask for? If you don’t, it’s high time you start doing it and uncover their sham like Neelabh Khanikar did!

On June 5, Monday, Neelabh Khanikar, who hails from Dibrugarh, Assam, was travelling with his family from Duliajan to Dimapur by New Tinsukia Rajendra Nagar Patna Express when he ordered two plates of egg biryani from the pantry car of the train and was charged Rs 80 per plate.

Though Neelabh was unsure about it, he enquired with the caterer if the price was according to the rate mentioned in the menu card and was told that it was. He was still unconvinced when he paid the price and thus went to the pantry van and requested the menu card to be shown. Although reluctant, the pantry card workers handed over the card to him. And guess what? The actual price of the biryani was Rs 63 and not Rs 80! 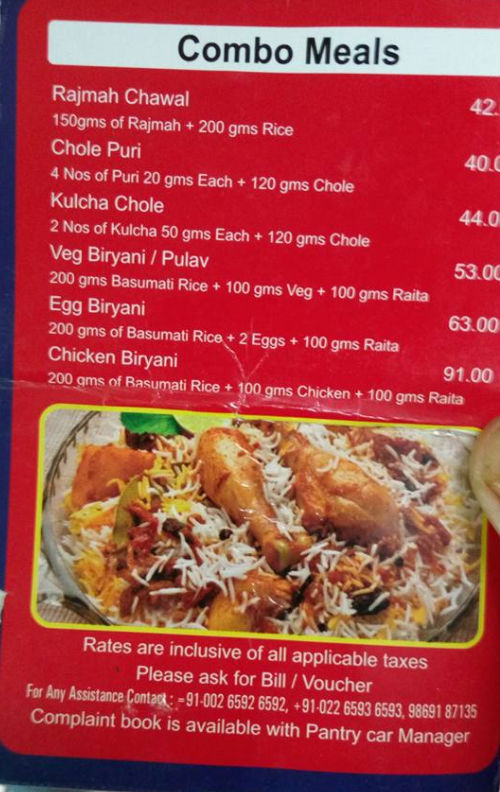 Neelabh was so outraged that he raised his voice against the deceit and demanded that the extra money charged should be returned to him and the other passengers.

He then uploaded a video on Facebook, where he can be seen urging the train authorities to give the reason for charging above the price mentioned in the rate card.

This is not the first time that the railway catering service has charged passengers more than the price of the food mentioned in the rate card.

After the regular complaints by passengers of beverages and food being overpriced on trains, the Ministry of Railways had issued a rate card for the catering services on trains. Railway Minister Suresh Prabhu had also reviewed all the catering contracts and instructed that the companies running operations using corrupt and unethical means should be blacklisted.

Though the grievances of the passengers were addressed, it seems the practice still continues.