India is keenly awaiting the Lok Sabha election results. Amidst all the speculations and predictions, online food delivery platform Zomato has introduced  ‘Zomato Election League’. The platform is offering discounts and cashback for customers who can correctly predict the country’s next prime minister. 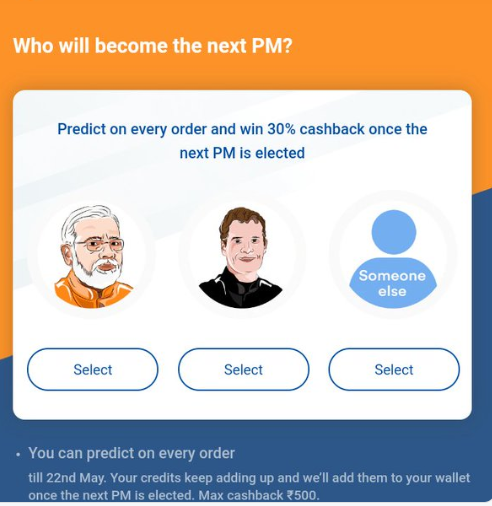 As per the company’s statement, users will get a base 40 per cent discount every time they order and 30 per cent cashback if their predictions are true. They can order and predict as many times until May 22. If their predictions are correct, they will get credits which will be added to their respective wallets once the new prime minister is elected.

During the Indian Premier League, the company had introduced  ‘Zomato Premier League’ where it offered similar discounts to those who correctly predicted the winner of the tournament. As per a report by the Business Insider, Zomato got 14 million predictions on May 2 from 224 cities across India due to which users were able to save Rs 15 crore.

Meanwhile, a series of recently conducted exit polls predicted a clear majority for the BJP-led NDA. Seven separate exit polls estimated that the NDA government would return to power with an overall tally ranging from 287-365 seats in the 543-member Lok Sabha. All the polls predicted that the BJP would retain its dominance in the Hindi heartland and make considerable gains in the east while failing to claim much ground in the south, except in Karnataka, reports The Indian Express.

The Bharatiya Janata Party led National Democratic Alliance has projected the incumbent Narendra Modi as the next prime ministerial candidate while the Opposition parties have not made any formal announcement in this regard.