Though the #MeToo movement reached a little late in India, it took the country by storm with known people like Union Minister MJ Akbar, actors Alok Nath and Nana Patekar as well as several journalists being accused of varying degree of sexual harassment.

According to a study by Big Data analytics and global media intelligence firm Meltwater, most conversations around the #MeToo movement came from India in October 2018, with 25% of global chatter. Following closely behind, the US was responsible for 22% of #MeToo conversations, with China and Canada coming third and fourth respectively. 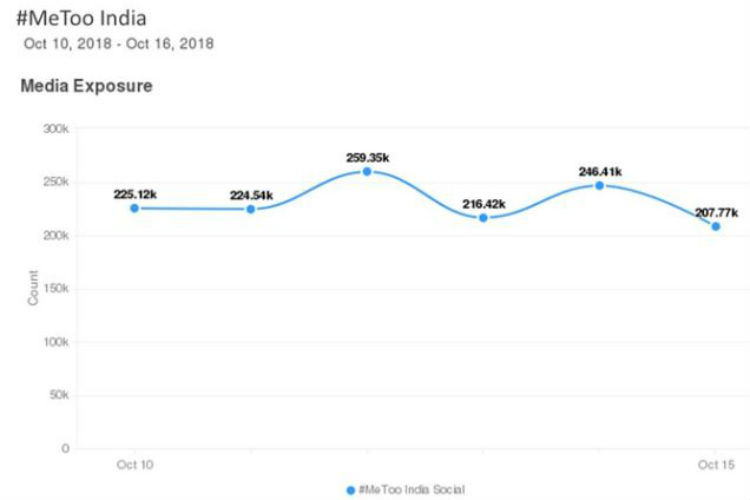 The data mined was between October 1 and 30 and indicated that though the movement was new to India, it found around 28,900 mentions in the editorial news. The movement spiked between October 10 and 18 accounting for 95% of searches, which incidentally was also when former Union Minister MJ Akbar resigned. To compare, the word ‘vote’ was mentioned 25,000 times all over the world.

On social media, #MeToo saw 3.7 million mentions globally in October. The data also suggested that the terms “sexual assault” and “sexual harassment” were also popularised alongside #MeToo. Another movement that stemmed from #MeToo is #TimesUp where abuse survivors demand that sexual harassment, in any form, will not be tolerated.

Another analytics platform—Google’s #MeTooRising map—used the trends data and charts to show that India was alive with people sharing their stories of sexual harassment.