India’s first prime minister Jawaharlal Nehru, is not really a popular guy in some corners of the internet.  There are conspiracy theories and then there are some more conspiracy theories. And they are not only aimed to discredit his politics but also cast serious aspersions on his personal life.

Let’s face it, we live in an age where social media forwards pass off as history lessons and fact-checking takes a backseat.

On his 130th birth anniversary, we decided to do some basic fact-checking on the many Nehru “stories” that are floating around. 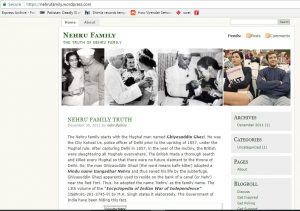 In 2015, “changes” were allegedly made to the entries on Nehru’s forefathers through a government of India Internet Protocol (IP) address on Wikipedia, declaring that Nehru’s grandfather Gangadhar Nehru, was a Muslim. Not that this tweaking should matter even if he indeed was. The changes made said that Nehru’s grandfather was actually called Ghiasuddin Ghazi, who was a kotwal of the Mughals, and he later changed his name to Gangadhar Nehru. “Gangadhar was born as a Muslim by the name of Ghiasuddin Ghazi but changed his name to a Hindu Ganga Dhar to escape British clutches,” said the edit made on Wikipedia. However, these edits were later deleted by volunteer editors of the online encyclopedia.

FACT CHECK: Historic accounts however suggest that the Nehru family were Kashmiri Pandits and the oldest known ancestor was Raj Kaul, who was a Sanskrit and Persian scholar in Kashmir. Raj Kaul’s house was by the side of a canal (nahar) and that’s how the surname Nehru evolved.

Another conspiracy theory that’s been making the rounds on social media for a while is that Nehru died of Syphillis, a sexually transmitted disease. However, records suggest that Nehru fell ill and later died of heart attack after India was handed a humiliating defeat by China. With medical records to prove otherwise available, these conspiracies on the cause of his death seem far-fetched to say the least.

FACT CHECK: The first known case of HIV-AIDS was discovered in 1986, by Dr Suniti Solomon who along with one of her medical students identified six sex workers in Chennai who were afflicted by it. Pt Nehru died years before, on May 27, 1964.

Of all the conspiracy theories, this one takes the cake. You can find various sites and videos alleging that actor Amitabh Bachchan is Nehru’s son. There are reports attributing this finding to the DNA reports of the duo. A few also attribute the proximity between Gandhi and Bachchan family. You can only imagine how successful these theorists have been in propagating their stories since some of these videos have over 1 million views.

FACT CHECK: It is a well-known fact that Amitabh Bachchan is the son of Hindi poet Harivansh Rai Bachchan and Teji Bachchan. The only common connection between the two families is that they both belonged to Allahabad and the two families were on cordial terms before a newspaper wrote about Bachchan’s involvement in Bofors scam. 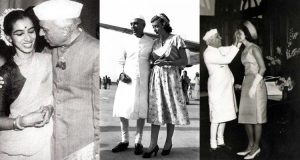 To project Nehru as a philanderer, there is a patchwork of images of Nehru at innocuous moments, with Jacqueline Kennedy and Mrinalini Sarabhai, embracing his sister at the airport, lighting a woman’s cigarette. You just have to type Nehru on YouTube and it throws up a slew of smear videos against him: Nehru can do anything to get a girl (over 6 million views), Nehru ki galtiyaan (1.5 million), Nehru died of AIDS (54000 views). Another story that was floated around was that Nehru got a Catholic nun pregnant and had to spirit her away from India. 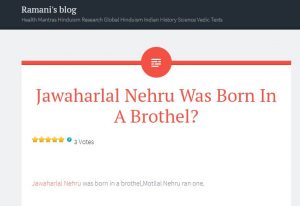 Pandit Nehru was born at a rented house in 1889 in Allahabad’s 77 Mirganj. With time, 77 Mirganj became infamous as a red light area with many sex workers residing there. Owing to the negative prominence that the place received, conspiracy theorists stated that he was born in a brothel.

FACT CHECK: In authoritative biographies, there is no mention of the existence of any brothel where Nehru was born. In fact, the where he was born was demolished in 1931 by municipal corporation much after Nehru moved out. Motilal Nehru, his father, moved to a posh location at 9 Elgin Road, close to the historical Alfred Park. As he gained further prominence, in 1899, Motilal moved to what is today known as Swaraj Bhavan.

6) Partition due to Lady Mountbatten:

A video on YouTube, by Rajiv Dixit claims that Jinnah, Nehru, and Edwina were college mates. There are even some theories which suggest that the relationship between Edwina and Nehru was responsible for partition.

FACT CHECK: There was a gap of over 10 years of age between all the three of them, with Jinnah being the oldest, then Nehru, and then Edwina. Edwina was a little girl of 9-11 years when Nehru finished his college. 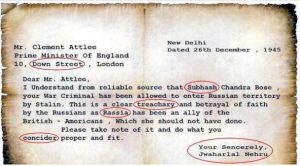 Last year, a “historical” letter did the rounds, where Nehru supposedly described Subhas Chandra Bose as a ‘war criminal’.

FACT CHECK: Bose may have disagreed with Gandhi and Nehru, but were known to have had great admiration for each other. In the Indian national army that Bose formed with Japanese support, he named three brigades after Gandhi, Nehru and Maulana Azad, and the fourth brigade was named after himself. On January 23, Prime Minister Narendra Modi declassified the (in)famous ‘Netaji Files’ – a set of about 100 files that were tucked away for decades. Conspiracy theorists were enthusiastic that it will lay bare Nehru’s lethal plans against Bose. On the contrary, it revealed a tale of warmth – a blend of official work and personal care on the part of Nehru.