Five minor boys, aged between 8 and 14, were arrested on Monday for allegedly raping an eight-year-old girl at a village near Dehradun.

The victim’s family approached the police only two days after the incident. An FIR was eventually filed at Sahaspur police station on the intervening night of Saturday and Sunday, Indian Express reported.

Ironically, the incident happened on a day when Uttarakhand chief minister Trivendra Rawat announced that the state government would soon enact a law to give death penalty for rape of minors. 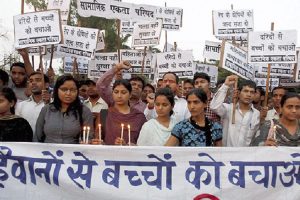 According to police, the accused belong to families of labourers and are students of Classes 6 and 9.

Speaking to Hindustan Times, Sahaspur station house officer Narendra Rathore said, “The five, according to their plan, took her to the house of a 10-year-old accused when his family members were out for work. One of them stood guard at the house’s main door while the others raped her.”

Meanwhile, all the five accused have been sent to correctional homes.