To end the plight of animals who undergo physical and emotional abuse at the hands of their masters, Centre has proposed a new law that will prohibit “use of animals for any performances or exhibition at any circus or mobile entertainment facility.”

At present, the use of big cats like tigers and lions is already banned in India. If the ban comes into effect, circus organisers will be barred from staging any animal performances – this includes horses, hippos, elephants, or even dogs. The ban is proposed in the recently released draft rules called the Performing Animals (Registration) Amendment Rules, 2018, The Times of India reported. It will be implemented after 30 days during which the ministry of environment will receive suggestions from stakeholders.

“No animals shall be used for any performances or exhibition at any circus or mobile entertainment facility,” said the draft rules.

The proposed ban is likely to eliminate the mistreatment of animals who are forced to live in confined spaces and perform acts that are painful. It is also likely to provide relief for animals who go through the ordeal of training that is often coercive. 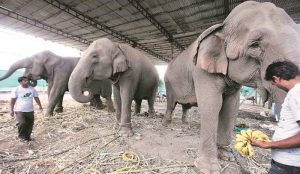 The ban on animal performances may pull the curtain on many circuses in already shrinking work space. Animal rights activists have been demanding a ban on circus animals for a long time. The People for the Ethical Treatment of Animals (PETA) India welcomed the centre’s proposal, calling it a progressive move by the government.

“For past 20 years, PETA has long been campaigning against the use of animals in circuses and we have been successful in rescuing about 150 animals from these circuses. These animals were forced to do tricks that are unnatural to them. They are forced to endure pain and suffering,” Nikunj Sharma, Associate Director of Policy, PETA, told ANI.

“It is really a progressive move by the government. Through this, the government has proved that India is a compassionate nation which does not tolerate any form of animal suffering. We are going to support government’s move,” Sharma added.