Sexual harassment charges against South Asian actor Aziz Ansari broke our heart. That a man who has displayed a sound understanding of the concept of consent through his work would fail to put to use his own wisdom, shocked feminists. Back home something harder has hit us. Multiple accounts of sexual harassment and inappropriate behaviour are being shared by women against a much-celebrated slam poet in Mumbai – Shamir Reuben.

Reuben, a prominent member of art/live performance collective Kommune is a self-proclaimed feminist. And that’s why, perhaps, his friends are finding it difficult to believe the horrible details that have surfaced in the public domain.

The allegations are grave – sexting minor girls, asking for nudes, forcefully kissing someone. The poetry circle in Mumbai is in deep shock after a fellow poet Sakina Bootwala shared screenshots of multiple conversations about Reuben’s past record as an alleged sexual predator on Facebook.

Bootwala says she was in junior college when she first came in contact with Reuben.  They met on a platform called ask.fm.

He approached me with a simple, sweet message, and we exchanged numbers. This was someone that was looked up to by everyone on the site, including me. Which is why I was extremely confused when he attempted to initiate sexting. I was far too naive to realise what was going on, however I was extremely uncomfortable so I played it off and managed to dodge the conversation.

It seemed fairly harmless, I even thought I was just being awkward and misunderstanding things, maybe that’s just how people of that age spoke and behaved, and I shouldn’t be reading too much into things. So I let it go. I continued to occasionally speak to him as though nothing had happened. I still thought of him as the person he portrayed himself to be. But I still felt weird every time I thought of that one conversation. I then distanced myself from him.

However, Bootwala, later came to know how Reuben had allegedly made many young girls like her uncomfortable with his inappropriate behaviour. She said she was going public with the conversations to ensure that the poetry circle remained a safe space for women. “The reason I’m putting this out now, is because I have come into contact with multiple people who have made me realize that this was not just a single incident and there may be more who shall be encouraged to speak out if I do so,” she writes in her Facebook post.

A deluge of screenshots have started doing the rounds since then. They reveal some disgusting details about  his extremely problematic behaviour. Some of the common allegations are that of persistent demand for nudes, talks about “taking” a minor girl’s virginity or being someone’s “first kiss”. Most of these girls were between 14- 18 year old when Reuben was  an adult.

In one  particular incident a girl claims that she was forcefully kissed by Reuben, who later boarded the same auto as hers and harassed her throughout the commute. Most of them claim Reuben pretends “to be there” as a patient listener for vulnerable young girls, while trying to manipulate them. 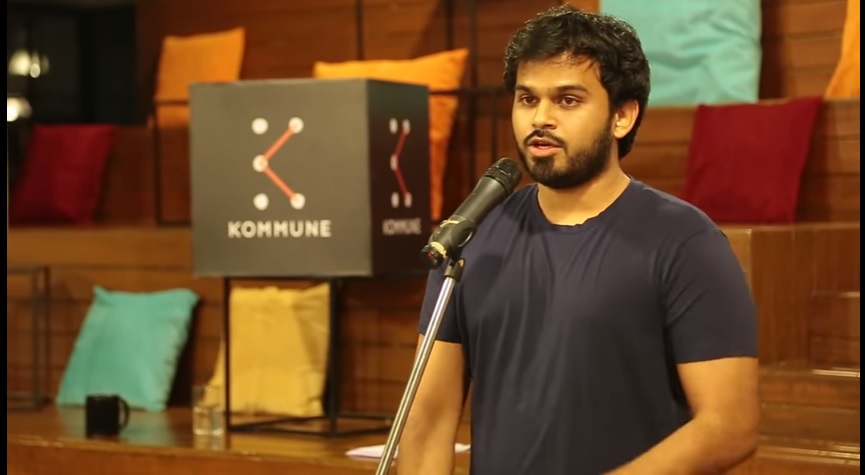 Kommune, has suspended him “pending an inquiry”.

Kommune recognises that posts have been shared about Shamir Reuben’s past conduct with certain individuals. The allegations made are of serious concern to us. Pending enquiry into these allegations, Shamir’s role at Kommune will remain suspended. pic.twitter.com/kIz3PDebfg

Even the city’s poetry circle has stood by Bootwala and condemned Reuben. Simar Singh, a prominent Mumbai poet said: “We, have witnessed the death of the Shamir Reuben, we thought we knew. We are equally angry as we are in disbelief, because we mourned and have been a part of the burial of a man, we thought we knew.”

As in Ansari’s case, most are puzzled that Reuben who always posed to be an ally of the feminist movement would indulge in predatory behaviour. Some of his popular poems,  “Why I Don’t Fall In Love” or “A man of few words” are absolute tearjerkers. His fans vouched for the “authenticity” and “pain” in his “quiver” – something they fell for. He seems to have a special talent for making people cry. Most of his poems are an aching rendition of how he lost his mother to cancer.

His facebook persona is that of a sensitive, progressive feminist man who understands what consent is. 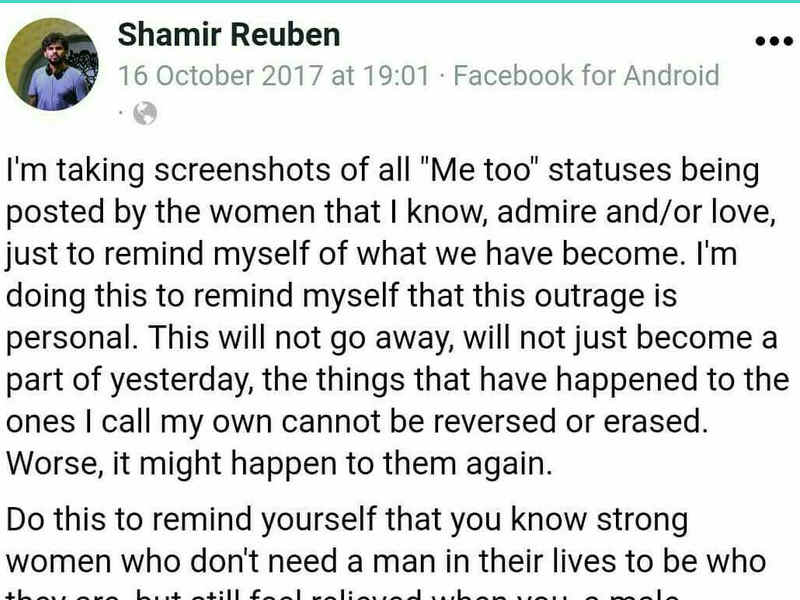 The apology he posted on Facebook is perhaps the worst we have seen in this season of bad apologies issued by the likes of Kevin Spacey and Ansari.

A lot has been said in the past day about me. If any of my messages or actions may have made Sakina or any other woman uncomfortable, I want to apologize profusely for any discomfort felt because of me. I genuinely do not believe my messages or actions would cause them hurt and I sincerely hope that I can be forgiven by all those that I may have inadvertently wronged.

Several things said are an incorrect portrayal of past events during 2013 – 2016, and the messages shared form part of longer conversations. The women to whom I sent messages were my friends, most of who I knew over months and even years, and messages between friends when read out of context often portray an incorrect picture of the true nature of events. These messages, when viewed today, are indeed inappropriate but were never intended to cause harm to any woman.

I wish Sakina, and all the women who have spoken-up, well and I respect them for raising this important issue. Violence of any form against women should not be tolerated. But, I have not and never intended to harm or harass them in any way.

An acquaintance of Reuben who briefly worked with him says: “It would be wrong to look at him as a young misguided youth who didn’t know better. He was a social media star as a teenager. He knew how to market himself. He would project himself as a progressive man and he would say politically correct things that he didn’t believe in just to be cool.”

What Reuben’s case tells us is that it’s high time we learn to detect these faux feminists who use an entire movement to shield their predatory behaviour. And the kind of support the women who spoke up against Reuben have received gives us hope that the old school hush-hush and we-will-sort-it-out-inside-the-circle attitude will no longer work.