You might have got a few messages on social networking sites applauding the newly sworn-in President of India Ram Nath Kovind for having bagged over 3 million followers on Twitter within a matter of minutes. Several people while sharing the ‘news’ credited Kovind for the ‘miraculous’ feat. But here is a fact check. Kovind did not get over 3 million followers in minutes. It was, in fact, the official account of Rashtrapati Bhawan that was handed over to the new President after Pranab Mukherjee’s term ended on Wednesday. In the transition, the followers of the @RashtrapatiBhvn handle also remained the same.

How does the transition take place?

The handing over of the official accounts of state heads is done by Twitter to ensure a smooth transition between administrations on the digital platform. “The new President Ram Nath Kovind will now use the official President of India account @RashtrapatiBhvn,” an official Twitter blog said.

To facilitate the digital transition, Twitter makes sure it preserves the digital history of the previous occupant. Pranab’s tweets as the President have been archived with the handle @POI13 as he was the 13th President of India. “All embedded Tweets from President Mukherjee will automatically link to @POI13 for continuity and preservation of the digital history of his administration,” Twitter said in its blog. Pranab can now personally engage with his followers through his personal Twitter account: @CitiznMukherjee. 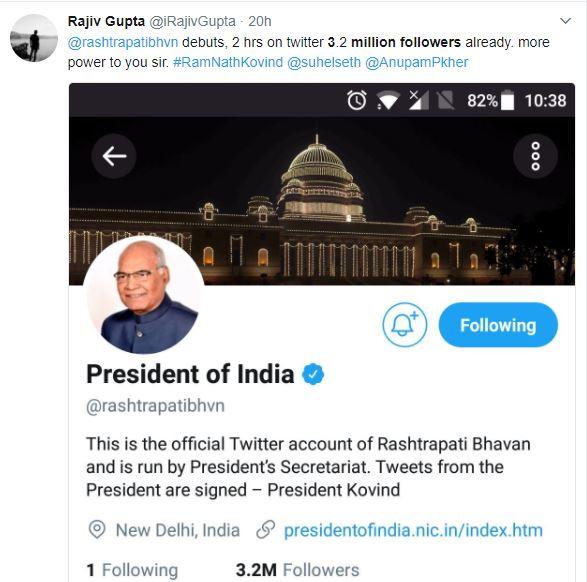 Who will be the followers?

Honoured to be sworn in as the 14th President of India; would be carrying out my responsibilities with all humility #PresidentKovind

Thank you for your affection & support ; tomorrow when I engage with you it will not be as President but as a citizen #PresidentMukherjee

Not just in India

The same procedure is followed for the official Twitter accounts of the Vice President and other ministries too. It is not just in India that this process is used. In the United States of America too, when Barack Obama left the office of the President, the official account @POTUS on Twitter was handed over to Donald Trump and Obama’s tweets were archived.

Photographs of President Mukherjee & President-elect proceeding for Parliament for ceremony of assumption of office of the President pic.twitter.com/WakFpfVFus

Photos of #PresidentKovind being sworn-in as the 14th President of India pic.twitter.com/8oWT1ZZ7df