“The main argument in favour of limiting the estate in the case of women is that they are incapable of managing it and also that they are likely to be duped or exploited,” observed G Durgabai during a debate over the clause of women’s property rights within the Hindu Code Bill on April 8, 1948 in the Provisional Parliament. “Also it is said that they are illiterate and they do not understand the principles of management, and hence, there will be a strong inducement to designing male relatives to take away her right,” she added.

“My answer to all this is this,” she continued, “The house is aware that the daughter has an absolute estate in Bombay today. Therefore, on that ground, I do not think they are exposed to any risk. The other argument is that we have scores of instances where women have proved better managers than men.” 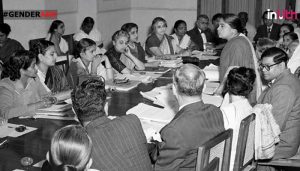 At a time when a vast majority of women in India were confined to the domestic sphere, the nationalist struggle propelled a few exceptional gems who shone bright with their talent, courage and drive for the rigours of nation-building. Durgabai, a Gandhian, a freedom fighter and later a criminal lawyer in the Madras High Court, did not come from a family of particular privilege.

Born on July 15, 1909 at Rajahmundry in the coastal east Godavari district of present-day Andhra Pradesh to social worker B. V. N. Rama Rao and his wife Krishnavenamma, Durgabai spent her formative years in Kakinada. From an early age, she was sensitive to the ubiquity of social inequity and suffering. She observed the cruel customs and poor treatment of women and recognised the urgent need for social reform. 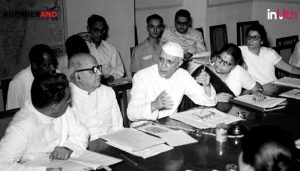 As a mere 12-year-old in 1921, who was deeply taken by Gandhi’s ideas of reforming social customs, Durgabai learnt that Gandhi was to visit Kakinada to address a town hall gathering. She wanted the Mahatma to separately address a gathering of Devadasis and Muslim women. The local hosts would allow it on the condition that she collected five thousand rupees for a purse to be presented to the Mahatma. Durgabai was able to arrange this with the help of her Devadasi friends; she also found a venue with great difficulty as Gandhi’s meetings often  meant that the owners were courting arrest. After the visit, Durgabai, her mother and brother decided to wear only handspun Khadi. She quit her school because English was being taught there. 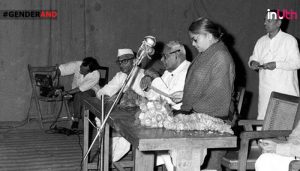 During the Salt Satyagraha, a young Durgabai took over as leader of the movement in Madras after freedom fighter T. Prakasam was arrested. She was arrested and sentenced to prison for nearly three years from 1930-1933, including a year of solitary confinement. In her autobiography, “Chintaman and I,” Durgabai recalled her years in imprisonment as an eye-opener to the circumstances of several women inmates who due to illiteracy had admitted to crimes they had not even committed. It strengthened her resolve, on one hand to become a lawyer who could provide pro bono legal aid, and on the other, empowering women with education. 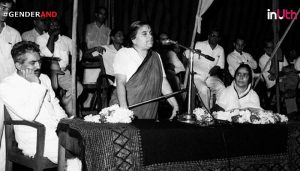 After her release from Madurai jail, Durgabai left politics and applied herself towards continuing her education. In December 1942, she was called to join the Bar at the Madras High Court. Simultaneously having observed that many destitute, deserted or widowed women were in need of skill and education, she started a condensed course for adult women who had discontinued school. They received intensive coaching to help them finish secondary school. Out of such activities, she pioneered the Andhra Mahila Sabha in 1937, which blossomed into a pivotal institution of education and social welfare.

Just when her legal career at the Madras High Court was taking off, Durgabai was elected to the Constituent Assembly as a Congress candidate in 1946. She was a member of the Steering Committee and took an active interest in the Constituent Assembly debates. With her legal background, Durgabai weighed in on judicial issues. She also led the amendment to the draft constitution in lowering the age from 35 to 30 for holding a seat in the council of states. In “Chintaman and I,” she mentions being particularly gratified for being associated with the debate on the Hindu Code bill. 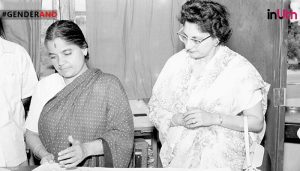 In 1950, when Durgabai was planning to return to her legal practice, Jawaharlal Nehru appointed her to the Planning Commission as leader of social services where she was colleagues with Chintaman Dwarkanath Deshmukh, the Finance Minister in Nehru’s cabinet of ministers. On January 22, 1953,  at the age of 44, Durgabai espoused Chintaman Deshmukh in a civil registered marriage. Nehru served as the first witness, followed by Sucheta Kripalani and Durgabai’s brother. Despite vastly different backgrounds, the couple had a successful alliance. Between them, they had an understanding that while one was earning, the other would give their services to the nation for free. 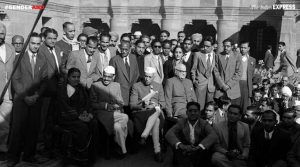 Remembered today as the ‘mother of social work’ due to her outstanding contributions, Durgabai laid the foundations of organised voluntary efforts and lobbied for state recognition to these institutions. “As the first chairperson of the Central Social Welfare Board (CSWB), she set up things which are really enabling to women on the margins. Durgabai recognised that increasing welfare and better status for women would not be possible without budgetary provisions for them,” says veteran economist Devaki Jain, who personally knew Durgabai since the late 60s. “At any time the CSWB would be networked to more than 30,000 small NGOs, perhaps the biggest civil society network and all funded by the Government of India. They were organising Small Economic Programmes, today we call them Self Help Groups,” Jain says.  “Durgabai,” she adds, “challenged the logic of [an economic] policy which could not see the value of social welfare as a major foundation for economic progress”. 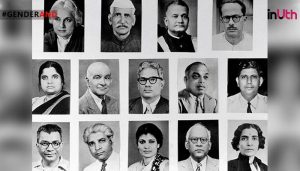 First official delegation from Independent India to the People’s Republic of China. The photograph of the members of the mission led by Vijayalakshmi Pandit, including Durgabai Deshmukh, 1952. (Source: PIB)

Interestingly, she was also among the early advocates of establishment of family courts in India, which she had had opportunities to study in China, Japan and Russia during her travels. “I thought that for a country of India’s size, establishment of family courts as part of its judicial system would be of immense help in many ways,” she observed in her autobiography, “It would not only reduce the workload of the High Courts and the Supreme Court but also provide a good forum for preventing family break-ups and restoring happiness to men, women, and children, making it possible for them to remain united.” Family courts were finally established in India in 1984, three years after she passed away, through the Family Courts Act.

Durgabai died on May 9, 1981 survived at the time by her husband. The couple, who were devoted to public service did not have any children. Writing in his autobiography “The Course of My Life” about his wife’s career as a social worker and a freedom fighter, Deshmukh wrote, “I found she could fairly be described as a prodigy, the complex product of inherited affluence, talent and powerful parental influence. Her father, an adopted son of a cultured family deeply committed to the help and service of his fellow-beings and very fond of his obviously talented daughter, had given her every encouragement.”

Durgabai charted a multi-faceted course of life that was decades ahead of her time. “Dynamic, firebrand, impatient to get things done and capable of turning immense charm on at a moment’s notice if she felt some public good could be served,” is how former Chief Secretary of Andhra Pradesh and retired civil servant Mohan Kanda describes her. Son of Durgabai’s childhood friend, Kanda knew her as an aunt since he was a little boy. “She never thought about herself. And she was absolutely fearless. And a great institution builder. She had the midas touch. Whatever she started is still around,” he adds.