If you need a pick-me-up at the end of an exhausting day, just Google what Tripura chief minister Biplab Deb has said in the recent past and you’ve hit jackpot.

Of late, the BJP leader has been coming up with pearls of wisdom of a special kind that makes us wonder whether he willingly ends up in these foot-in-mouth situations.

He also suggested that the increase in bird droppings would help in pisciculture or fish farming. “It [oxygen] gets recycled. Fish in the water will get more oxygen. They also benefit from the bird droppings. Thus, pisciculture will benefit and fish will grow faster, that too in a completely organic way.” 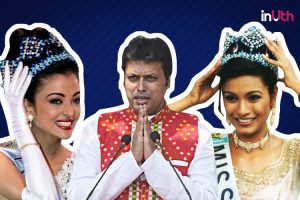 He further proposed to distribute 50,000 white ducklings underlining that it would help improve the rural economy. After this latest gem, we look back at the series of gaffes he has made:

Deb, who took charge as Tripura CM in March, debuted with ‘the internet had existed during the time of the Mahabharata’ remark on April 18.

He said such technology helped Sanjay (who, according to Mahabharata, was blessed with divine vision by Ved Vyasa) narrate details of the Kurukshetra war to blind King Dhritarashtra, The Hindu reported

Soon, the 47-year-old politician launched an attack on the ‘international fashion mafia’ and the cosmetic surgery. He said that 1997 Miss World Diana Hayden was not worthy of the crown and that Aishwarya Rai, who won the title in 1999, was a better representation of Indian beauty. “Indian women did not use cosmetics or shampoo. We washed our hair with ‘methi’ water to prevent hairfall and bathed with mud. Beauty contest organisers are international marketing mafia that tried to capture a market of 125 crore Indians with their move,” Deb had said. Soon, he had to apologise for his insensitive remarks.

On the occasion of Buddh Purnima, He also claimed that Gautam Buddha walked across India and went to countries like Japan, Myanmar and Tibet to spread the message of peace and harmony.

The 47-year-old had also suggested civil engineers are best suited to enter the civil service.

“After pursuing mechanical engineering one should not go for Civil Services. Instead, civil engineers should join Civil Services as they have the knowledge and experience to help build administration and society,” Deb had said at an event at the Prajna Bhavan in Agartala (April 30)

5) Threatening To Chop Off Nails

Following the criticism over his comments on civil engineering, Deb came up with this gem: