The Belgian Malinois, a highly intelligent breed of dogs that earned fame after sniffing out Osama Bin Laden from his hideout in Pakistan’s Abbotabad in 2001, will be pressed into service to thwart fidayeen attacks in India.

According to a report in Hindustan Times, the CISF’s Delhi Metro unit is planning to procure a squad of the canines to guard Delhi Metro Network and the Indira Gandhi International airport.

Known for their intelligence and high work ethics, these dogs were particularly chosen after the Labradors, German Shepherds and Cocker Spaniels available with the force failed to detect ‘fidayeen attackers’ during dummy tests.

“Recently, exercises were conducted to test the ability of our dog squad to counter fidayeen attackers. Our men posed as terrorists and tied explosives around them. The dogs were let off to detect the explosives,” a senior officer on condition of anonymity told the daily. 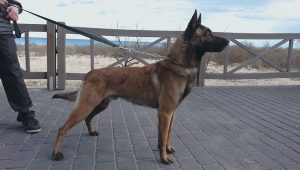 While the existing squad has expertise in detecting explosives but their role in detecting fidayeen attackers was not so impactful, he added.

In India, the ITBP and National Security Guard (NSG) commando unit have already inducted Malinois breed into its K-9 unit.

One of the major reasons for the popularity of Belgian Malinois in India is their adaptability in extreme weather conditions.

Other intelligent breed like German Shepherd often struggle in hot and humid conditions due to their thick coat of hair on their body.

Notably, these dogs were first deployed in the Kaziranga national park to curb anti-poaching activities back in 2013.