Turns out, no matter how many times as the Supreme Court has held that sexual orientation is natural, many in India are still struggling with the concept that someone else’s sexuality is none of their business.

A Delhi-based doctor has been accused of using electric shock therapy to ‘treat’ homosexuality, which he allegedly considered to be a “genetic mental disorder”, PTI reported. DR PK Gupta has been summoned by a Delhi court because he continued the bizarre practise despite being suspended by the Delhi Medical Council (DMC).

The court took note of a complaint against Gupta by the DMC, which claimed that he was using hormonal treatments and shock therapy to ‘cure’ his patients. The complaint said the DMC had debarred Gupta in 2016 from practising in Delhi and as he was still projecting himself as a doctor, he was liable for prosecution. 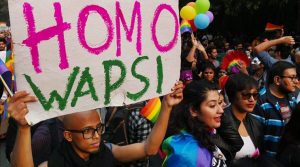 Metropolitan magistrate Abhilash Malhotra said, from the complaint it was clear that Gupta was practising as a doctor in Delhi despite being debarred by the DMC, and he was prima facie found to be contravening a provision of the Indian Medical Council Act which entails a maximum of one year jail term.

The Court said the treatment given by doctors as a part of “conversion therapy” was not recognised either by medical science or by legislature. Conversion therapy is a set of irrational beliefs and preposterous claims that a queer person can be made to conform to a heterosexual lifestyle after undergoing several spiritual, medical, and psychological interventions.

For the record: sexuality cannot be ‘fixed’. It is not by ‘choice’. And with the partial strike down of section 377, it is no longer considered criminal by Indian law. Enough with your homophobia!