The national capital got its first FIFA-certified football field.
On Wednesday, Revenue Minister Kailash Gehlot inaugurated two sports complexes in Delhi– in Mundhela Kalan and Kair in Najafgarh, reports The Hindu. The Najafgarh sport complex, stretched across 18.20 acres, has the football field which was approved by FIFA for hosting international matches after they carried out an inspection last year, according to Times Of India.

The sport complex also has a cricket ground with seating stands, synthetic athletic track, tennis court, basketball court, swimming pool, jogging track, indoor sport facilities including academies and residential blocks.
The amenities at the sports complex has been developed at a cost of ₹147 crore, reports Business Standard.
“The Delhi government has initiated various schemes for promoting various sports amongst children and youth from the grassroots level and has invested generously in sports infrastructure to provide international standard sporting facilities,” Gahlot told media.
The sports complex at Mundhela Kalam village has a six-lane 400 meter and eight-lane 100 meter synthetic tracks and synthetic football field for which FIFA certification is likely to be issued very soon, reports The Business Standard 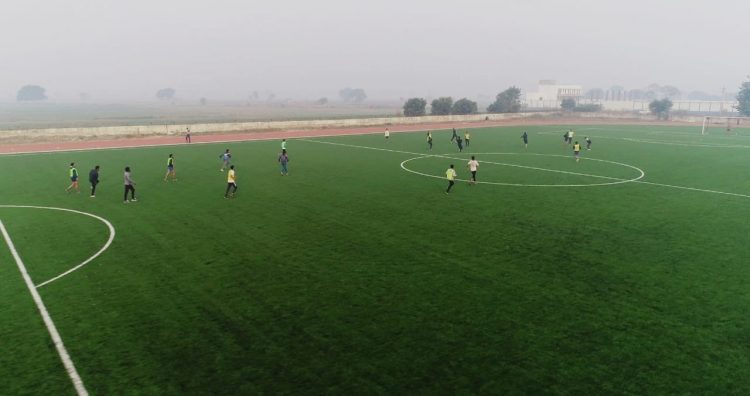 Why a Sports Complex in Najafgarh?
This sports complex aims to cater to sports aspirants in rural areas. Many sports aspirants have to reportedly travel 40 km to access stadiums in Central Delhi.
The decision was taken by the Delhi Cabinet in February after the Directorate Of Education submitted a proposal to the state government.
“The Directorate of Education felt that it does not have any sports stadium/sports complex in rural areas of Najafgarh and its nearby villages. It owns a small stadium in the heart of Najafgarh which is surrounded by eight government schools and does not fulfil the requirements of sports needs of Najafgarh itself,” the statement said, reports The Hindu.
The Directorate of Education also felt that excellence in sports is best possible only when the sportspersons receive training in specialised sports residential academies.