Mocking a man for his ‘funny’ dance steps cost a 20-yr-old dance instructor his life. The incident happened in Central Delhi’s Mandir Marg area where scores of people were dancing during a procession on Valmiki Jayanti on Wednesday night. The accused, still unidentified, was dancing when Avinash Sangwan (the victim) reportedly made fun of his steps and an argument broke out between them. The man came towards Avinash and pushed him away angrily, Hindustan Times reported. The accused left the spot and returned with two of his friends half an hour later. He shot Avinash from close range in the chest. Moments after Avinash was shot, he was captured on camera taking off his t-shirt with the blood spilling from his chest. Avinash was rushed to a hospital, where he was declared brought dead.

“He returned with his two friends and they all joined us in the dance. Suddenly, I heard a gunshot sound and saw Avinash bleeding from his chest. We helped Avinash remove his t-shirt and found him bleeding from his right side of the chest. Before we could understand anything, Avinash collapsed on the road. We rushed him to Lohia hospital in a passerby’s car,” said Nikhil Sangwan, the victim’s friend in his police complaint. 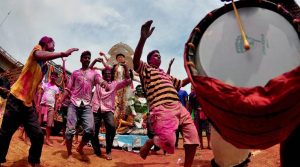 Bhubaneswar : Devotees carrying an idol of Goddess Durga for immersion in Kuakhai river in Bhubaneswar on Sunday. PTI Photo (PTI10_1_2017_000086B)

A murder case was registered at Mandir Marg police station. An investigation into the matter is on.

Violence and ruckus during religious procession is not a new phenomenon. Inebriated youth dancing to loud music and making a mockery of traffic rules is a common sight during such processions so much so that any person who is not a part of the procession wants to steer clear of it. Last week, eight policemen including a DCP rank officer was injured during a Durga idol immersion at East Delhi‘s Yamuna Ghat after a mob turned violent. The police gypsy was damaged and the injured had to be rushed to the hospital. In Vadodra, ten revellers were held in a drunken state in Gujarat’s Vadodra during Durga idol immersions. In UP’s Gonda, a mob torched half a dozen vehicle and indulged in stone pelting during the idol immersion procession. The district magistrate got injured while trying to control the situation.

Various instances of vandalism and damge to public property during the annual Kaanwar yatra also invited the wrath of the Supreme Court which came down heavily upon the authorities for going easy on such elements.

“Damage to public properties is a serious issue… This is a grave situation and this must stop. We will take action and won’t wait for amendments,” the court said.