You know you have reached the wrong side of the internet when you see a Rakhi Sawant retweet or re-share. Ms Sawant, who has earned herself a sizable following in all social media platforms, also has the reputation of sharing the most problematic content when it comes to current affairs. About month ago, when the whole country was mourning Sridevi’s death, Ms Sawant chose to share a rather insensitive photograph of the mortal remains of the superstar. Needless to say, it received severe backlash.

But this article is not about Rakhi Sawant and her questionable social media strategy. She is an incidental part of it.

Earlier this week, Ms Sawant shared a video on Instagram, claiming the it’s the last video of the Kathua rape victim. The very title got her about 50,000 hearts.

It clearly wasn’t. The video has a girl with uncanny resemblance to the 8-year-old victim singing a schmaltzy Bollywood song. It’s very likely that the video is hidden somewhere in your own timeline. Clearly, it’s hard to resist the lure of the hashtag bearing the victim’s name.

Orijit Sen, the graphic artist whose sketch of the victim became one of the most iconic portraits shared on the internet after he posted it on Facebook on April 12, recognises the importance of hashtag activism. “We can no longer dismiss social media movements. We have to realise that live in a time where governments can be toppled thanks to Facebook. Movements can very well be mobilised through social media. Which is why,  we have to be even more careful about the kind of things we put up,” says Sen.

And soppy cartoons where the Kathua rape victim is shown having conversations with the Nirbhaya rape victim, calling her didi and discussing the sorry state of affairs in the country is definitely not a “responsible response.” 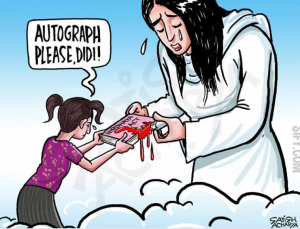 “My sketch of the little girl was a spontaneous reaction. If you ask me to make a cartoon on the issue now, I will never focus on the victims, instead I will turn the mirror on us, the society. Making Nirbhaya and Kathua rape victim have an imaginary conversation seems so lurid. It is just not the right thing to do,” says Sen.

Jhuma Sen, assistant professor, Jindal Global Law School, has her reservations about the use of images as our vocabulary for protest. “Not all kinds of images, but specifically the images of those on whose bodies protests are performed. On mainstream media and elsewhere (including social media) she is being paraded as India’s daughter. Rajdeep Sardesai has certified it as well. I don’t watch Republic but I hear Arnab is also close to doing that. Making her an exception aids in this framing and images and the accompanying text definitely help too in that construction. But we know too well she is not the exception,” says Sen.

Mass consumption of image, art, specific spins on narrative may sometimes be for the greater good. Even if we argue that these “heart-wrenching” cartoons and videos manage to reach out to greater number of people, can we really discount the ethical dimension of the issue?

“What kind of people are we reaching out through such cartoons? Will you really mobilise the movement? That’s the question to ask,” says Orijit Sen.