The Narendra Modi government has rejigged the committee on “Sexual Harassment at Work Place” that was constituted at the height of India’s #MeToo movement last October. Union Home Minister Amit Shah will be heading the group of ministers. Shah has replaced the then home minister Rajnath Singh who is the serving Defence Minister now. Finance Minister Nirmala Sitharaman, Women and Child Development Minister Smriti Irani and HRD Minister Ramesh Pokhrial Nishank will also be part of the group, Hindustan Times reported.

The latest move by the government comes days after an RTI filed by The Quint revealed that the committee has been dissolved. According to reports, the committee was possibly reconstituted just to avoid backlash from working professionals pan India.

Why This Panel Was Formed At First Place

The committee on sexual harassment was formed to make structural changes in the legal framework to prevent sexual harassment at workplace.. The announcement came soon after then Minister of State for external affairs, MJ Akbar, resigned from the Modi government after several women brought sexual harassment charges against him. The earlier panel comprised some of the most senior union ministers, including Nirmala Sitharaman, Maneka Gandhi and Nitin Gadkari. It also claimed to have wanted to come up with ways to ensure that justice was being delivered with “time bound implementation”. 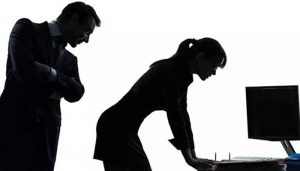 How It All Turned Out

Nine months later, replying to an RTI request filed by The Quint, the government said that the committee on “Sexual Harassment at Work Place” has been dissolved.  The RTI had also asked for the number of times the GoM met, the dates of all the meetings and the minutes of each meeting. It also asked for a copy of the recommendations which this group was supposed to make within three months. The government, however, refused to disclose the minutes of any of their meetings. The information was denied under Section 8 (i) of the RTI Act which is invoked to justify not disclosing information which “would prejudicially affect the sovereignty and integrity of India, the security, strategic, scientific or economic interests of the State, relation with foreign State or lead to incitement of an offence”.

Why This Is Important

Sexual harassment at workplaces has been a growing concern for women in India. It takes more than courage for woman to stand-up against the harassers at workplace often because of the power dynamics involved. There are several instances where a woman reporting sexual harassment is stigmatised, humiliated and even lose their jobs without a fair inquiry. The Supreme Court in its 1997 Vishakha verdict had laid down detailed guidelines for setting up internal complaint committee headed by a woman in every Government and private organisation to deal with complaints of sexual harassment at workplace. These guidelines were effectively the law, till the Sexual Harassment of Women at Workplace (Prevention, Prohibition, Redressal) Act was passed in 2013. This was hailed as a major step, but in time it has become apparent that the law has several loop holes and shortcomings.

For example, it allows a woman to make her complaint only within three months of the offence having taken place. The members of sexual harassment committees are also picked by the workplace administrators or higher ups which makes it even more difficult for victim to get justice.