A 44-year-old man Dalit man from Uttar Pradesh’s Bulandshahr was allegedly forced to lick his own spit in public by a local Panchayat after his son married a girl from another community.

In his police complaint, Shree Krishna, who is a resident of Sonda Habibpur village, said he was assaulted, made to lick his own spit and threatened that the women in his family would be raped in a Panchayat on Tuesday, Times of India reported. The complainant also alleged that police initially reluctant to lodge an FIR despite the submission of a written complaint and they were finally forced to file an FIR against five named accused after local news channels ran the story.

Speaking to The Hindu, Shree Krishna, a labourer, said, his 21-year-old son Shivkumar fled with Razia (18), a resident of the same village, on June 6, after which her family approached the police. On June 19, Shree Krishna managed to locate the duo in Delhi and convinced them to come back to the village. 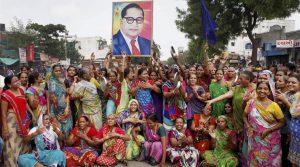 “The girl was produced before the court where she insisted that she went with Shivkumar of her own will and wanted to be with him,” Krishna told The Hindu. With the court’s permission, the couple got married the same day. Mr. Krishna said though he was angry with the couple, he was concerned for their safety as well.

On June 26, Krishna was summoned by the Panchayat as the girl’s family wanted to settle the matter. “There were about 100 people, mostly locals from the upper caste and the family members of the girl,” Krishna told The Hindu. “I was told to lick my own spit. When I didn’t do it for a few seconds, they thrashed me. I finally did it,” he added.

Meanwhile, a case has been registered under sections of the Indian Penal Code and the SC/ST Act and two people, including the girl’s father, have been arrested in connection with the case.