The rise of jingoistic voices is drowning democracy in India it seems.

According to Democracy Index report 2017 compiled by the Economist Intelligence Unit (EIU), India has slipped to 42nd position out of 167 countries.

Even as the country scored well on electoral process and pluralism (9.17, it has not managed to score so well on other four parameters — political culture, functioning of government, political participation and civil liberties.

The report also classified India under the category of flawed democracy and attributed the dip in India’s rankings to “The rise of conservative religious ideologies”.

The US (ranked 21), Japan, Italy, France, Israel, Singapore, and Hong Kong have also been named among ‘flawed democracies’.

The authors of the report noted. “The strengthening of right-wing Hindu forces in an otherwise secular country led to a rise of vigilantism and violence against minority communities, particularly Muslims, as well as other dissenting voices.” 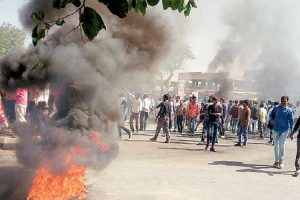 The index ranks 165 independent states and two territories on the basis of five categories: electoral process and pluralism, civil liberties, the functioning of government, political participation and political culture.

The 2017 report also measured the state of media freedom and classified country’s media as ‘partially free’. “India has also become a more dangerous place for journalists, especially the central state of Chhattisgarh and the northern state of Jammu and Kashmir,” the Economist Intelligence Unit said.

Notedly, India has been ranked 49th out of 167 countries with regard to media freedom,

“This is one of the main reasons why India’s rankings dropped. The moment the media’s working is interfered with by governments, countries take a dip on the index,” a researcher, who was involved in the compilation of the report, said.