Web portal Cobrapost released two set of videos, one last week and the other in March, of a sting operation, titled “Operation 136”, rattling the media fraternity. The videos laid bare the hypocrisy of 27 different media organisations that were willing to accept money in exchange for propagating “Hindutva politics”.

The videos featured higher-ups of mainstream media organisations, who were willing to accept heaps of cash in exchange for running content and advertorials against the opposing parties. Two newspapers – one West Bengal-based Bartaman Patrika, and the other Agartala-based Dainik Sambad – who were similarly approached with offers, refused to entertain the undercover reporter’s requests. 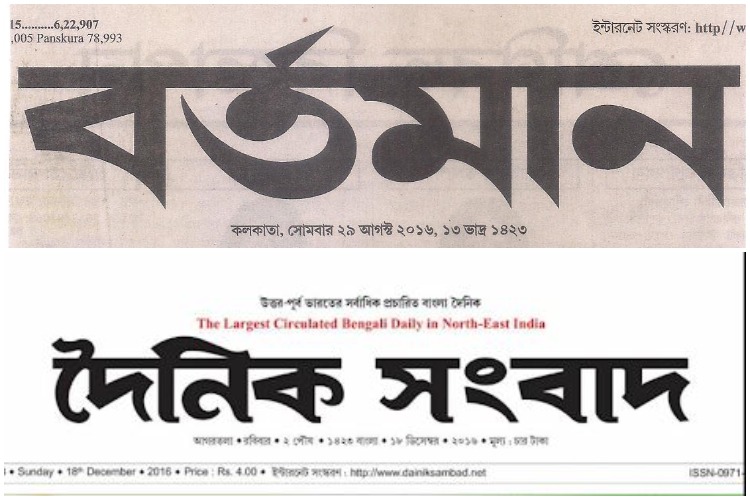 Masthead of the two newspapers

The reporter, Pushp Sharma (posing as a representative of a made-up right-wing group called Srimad Bhagvad Gita Prachar Samiti) met with Bartaman Patrika’s general manager (advertising) Ashish Mukherjee. Sharma initially presented a budget Rs 1.5 crore and then hiked it up to Rs 10 crore in order to run advertorials and jingles in favour of a political ideology.

“I just remember that his approach was all about pushing hardlining right wing ideology, but I told him that this was completely against our newspaper’s principles. Once I knew what he had in mind, there was no way I could have gone forward with the conversation, but he jacked up the price to Rs 10 crore. A big amount like this is a huge deal for a small organisation such as ours but had I accepted his offer, our organisation would cease to exist,” Mukherjee told InUth over the phone.

During the 1970s, he defied the diktats on the media during Emergency under the Indira Gandhi-led government and chose to go to jail over complying with the restrictions.

“I had the fortune of working with him for about 15 to 16 years. After quitting from Anandabazar Patrika, he built the entire organisation with a set of principals that we still abide by,” says Mukherjee.

The Cobrapost reporter also met with an unnamed executive from Dainik Sambad. However, he refused to run any kind of content containing religious propaganda, clearly stating that it was against their policy to run any advertorial on religion.

Dainik Sambad was founded in 1966 by Phani Datta Bhaumick and was taken over by his brother Bhupen Datta Bhowmick in 1969. It is one of the most-circulated Bengali dailies in the Northeast region. The newspaper is currently run by Pradeep Dutta Bhaumick, whose father started the paper. “We have never catered to any ideology or religion. We are a newspaper that does stories on unsung heroes or we highlight the problems of the underprivileged. We have never pandered to any political party and we never will,” says Bhaumick.

What else has Cobrapost investigated?

Apart from the probe into the media industry, previous Cobrapost stings have revealed that the PMO had allegedly asked for user’s data from Paytm vice-president Ajay Sharma after protests in Kashmir. In 2005, Cobrapost’s investigations revealed that eleven MPs were involved in accepting money for putting forward questions in the Parliament.

The sting was named Operation 136, which is the number at which India stands in the World Press Freedom Index. Cobrapost was founded by one of Tehelka’s founders, Aniruddha Bahal. It has often covered high-profile investigations.