The Pakistani army has confirmed that it has captured one Indian pilot while the Indian army has also said that one of its pilots is missing in action. The arrested pilot has been identified as Wing Commander Abhinandan, who is currently under Pakistan’s custody. The alleged capture has brought back the grim memories of the arrest of Flight Lieutenant (now Group Captain) Kambampati Nachiketa during the Kargil conflict.

In the early hours of 27 May, 1999, Nachiketa was tasked to hit targets in Batalic Sector. Piloting a Mig-27 fighter aircraft, Nachiketa carried out his first attack on the ground-based military targets. However, when he returned for his second attack, he was hit by an American stinger’ surface to air missile and his aircraft flamed out. The problem our pilots face in these situations, they are strictly told not to cross LoC while attacking enemy targets which leaves them with a small area to manoevure and making them relatively easy targets for such missile attacks. The MiG crashed 12 kilometres inside Pakistan. Despite his efforts to escape, a Pakistani army patrol captured Nachiketa.

Nachiketa was publicly paraded by the Pakistan army, which was aired on television. Later, he was confined in a prison in Rawalindi. The Indian High Commission flung into action and asked for immediate repatriation of the captured Indian pilot under the Geneva convention. Nachiketa was handed over to the Red Cross that brought him back to India where he was greeted by President K R Narayanan and Prime Minister Vajpayee as a hero. 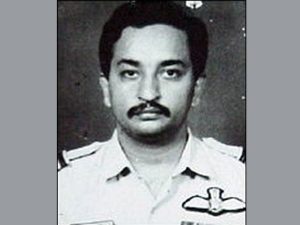 However, Nachiketa’s colleague Squadron Leader Ajay Ahuja, who was captured on the same day, was not as lucky.  Ahuja’s aircraft (MiG-21) was hit by enemy’s shoulder-fired Surface-to-Air Missile (SAM) when he was trying to locate a downed pilot. Ahuja was reportedly shot dead when he hit the ground on the Pakistani side in a parachute.