There has to be something absolutely twisted about people who find validation in someone’s tragedy. If you followed Saba Qamar’s (who played the lead actress in the movie Hindi Medium) trend on Twitter, you would know what I am talking about. Ever since the Pakistani actress broke down on national television recalling a humiliating experience of getting frisked at an international airport,  hyper-nationalists, jingoistic Indians have taken it upon themselves to shame her for her nationality.

So, what did Qamar say?

In the video that has now gone viral, a teary-eyed Qamar is seen talking about how she was singled out for frisking at an international airport, simply because she had a Pakistani passport.

We are so proud of Pakistan, we keep shouting Pakistan Zindabad. But we come to know about our real status in the world when we go abroad. The way we are singled out by security personal and put through checking is humiliating. When I went to Tbilisi (capital of Georgia) for a shoot with members of my Indian crew, all were allowed to go. I was stopped because of my Pakistani passport. At that moment it dawned upon me how the world looks at us.

The sadistic pleasure that some hyper-nationalist twitter handles are deriving out of it is simply appalling, to say the least. 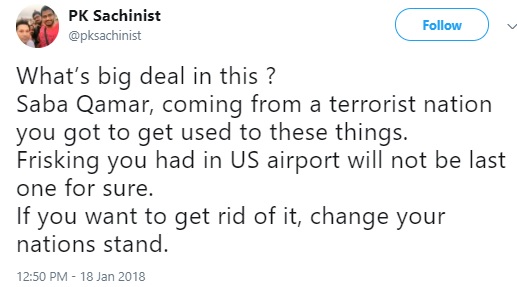 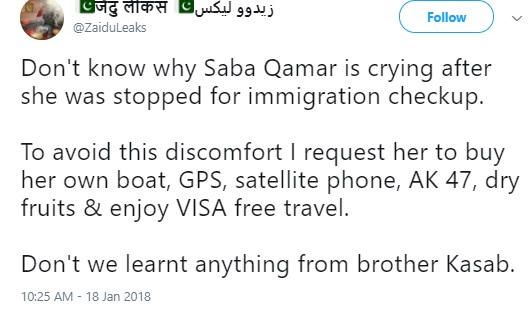 Busy celebrating the doomed state of affairs in the neighbouring country via this heartbreaking video, they simply forgot to find out what exactly prompted Qamar’s emotional outburst.

It’s not just #SabaQamar who feels humiliated. All #Pakistanis feel humiliated when we are considered a terrorist state, when our children are killed like flies & we can’t get justice for them, when terrorist like #HafizSaeed roam around freely & we watch them helplessly. pic.twitter.com/pHalKqo7cq

Saba raised the issue of disadvantages of holding a Pakistani passport in the aftermath of the rape and murder of a 7-year old girl in Kasur, Lahore.  She raised it to drive home the message that the false bravado of nationalism doesn’t protect Pakistanis, either from international humiliation or from sexual predators back home. That, in its preoccupation with spreading hatred against its neighbour, it forgot to provide safety to its girls and maintain an international reputation for its citizens.

Here’s the chunk in its entirety:

I am in so much pain, despite the fact she isn’t related to me by blood. Her parents must be dead. We have chosen you as our leaders, you have to give us justice. Please give us justice. We are so proud of Pakistan, we keep shouting Pakistan Zindabad. But we come to know about our real status in the world when we go abroad. The way we are singled out by security personal and put through checking is humiliating….

Instead of putting out bits and pieces of her statement without the right context, can the trolls recall what they did to the following Indian celebrities when they dared to speak their mind about the state of affairs in the country? –

Deepika Padukone (on Padmavati): “We have regressed as a nation.”

Consequence: Calls for chopping her hands, legs and heads were made.

Aamir Khan (on increasing cases of lynchings in India): “When I chat with Kiran at home, she says ‘Should we move out of India?’ That’s a disastrous and big statement for Kiran to make.”

Consequence: Calls for boycotting his films were given out, he lost out on endorsement deal with SnapDeal and obviously was asked to go to Pakistan. His family had to be provided with security for sometime.

Consequence: called anti-national, asked to go to Pakistan, calls for boycott of Raes and Dilwale.

That says it all.

So STFU and take notes on how to hold the state accountable and ask it to go back to doing its job.